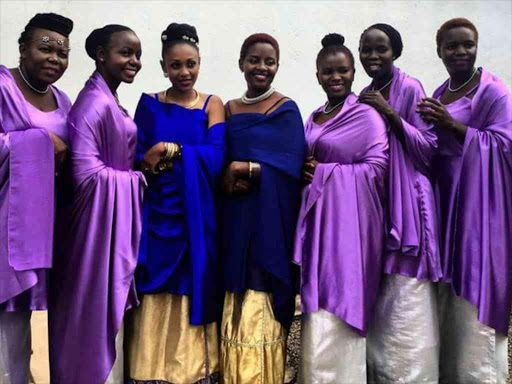 KTN journalist Joy Doreen Biira was arrested in Kasese, Uganda and her whereabout is still unknown.

The journalist had been giving eye witness account on the fighting in Kasese that has left 55 people dead,

The KTN anchor was arrested with her fiancee, and three other friends

Charles Wesley Mumbere, the king of the Rwenzururu Kingdom and his palace razed down.

"Our friend Joy Doreen Biira, a journalist with KTN has been arrested in kasese according to her mother. Her whereabout still unknown. She has been giving eye witness accounts on the fighting in Kasese. Just yesterday was with her and I left today," a journalist friend, Barbara Among, posted on Facebook on Saturday night.

Biira, who had taken her fiancee for introduction, had posted a video of the burning palace on her Instagram account.

"It's so sad what I've witnessed today with my own eyes...part of the palace of the Kingdom I'm from, the rwenzururu kingdom, burning down..." she had posted on her Facebook page. The post was later deleted.

"Family member says military came to the home and demanded for photos had taken of the attack on the palace ," her friend Rosebell Kagumire posted on Twitter.

in an effort to put pressure to the Uganda government to release the journalist.

Uganda Police said they had given the local king

time to surrender but he did not forcing the police to move in.

"The attackers used IED (improvised explosive devices as) grenades, guns, and spears to attack security personnel," the police said, adding a police vehicle at a security post was burned during the fighting.

"So far we have arrested 15 key ring leaders," police said.

According to the Daily Monitor, a leading local daily, a group of security personnel on patrol in Kasese, the biggest town in the region, was attacked by Mumbere's royal guards on Saturday, sparking a firefight that led to clashes.

On the morning of the king’s arrest, Ugandan president Yoweri Museveni had called and ordered him to disband the guards, who are believed to be part of a militia agitating for the creation of an independent republic straddling Uganda and the Democratic Republic of Congo.

The Ruwenzururu kingdom is a traditional monarchy based near the Rwenzori mountains which straddle Uganda and the Democratic Republic of Congo, of the Bakonzo people -- with supporters among those who share the same culture and language in the DRC.

The monarchy started out as a separatist movement of the same name when the Bakonzo -- tired of being subjected to the rule of another tribe under colonial rule -- declared their own kingdom in 1962.