Family Bank to be prosecuted over NYS scam 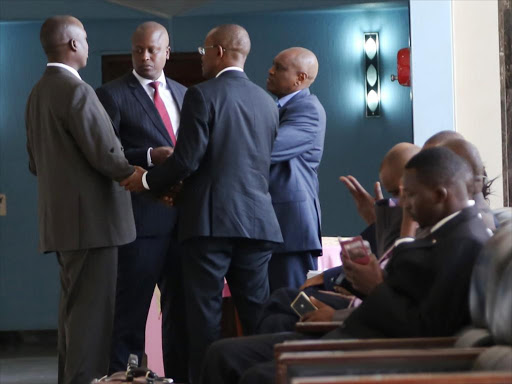 Director of Public Prosecutions Keriako Tobiko has ordered the prosecution of Family Bank and seven former employees for aiding the money laundering of the NYS funds.

The National Youth Service is reported to have lost more than Sh1.6 billion, which was transferred from its Central Bank account to three accounts in Family Bank. The money was later transferred to other banks to the accounts held by suspects in the scandal.

Family Bank is accused of handling the money and not reporting it to the Financial Reporting Centre, despite the significant transactions.

The bank was fined Sh1 million for failure to report the large transactions.

In a letter on Monday, the DPP also asked the Directorate of Criminal Investigations to open investigations against 28 other banks said to have handled the money and report to him in three weeks.

Tobiko said, however, that there was no evidence linking the bank’s directors to the alleged scandal and they should not be charged.

He directed the police to finalise the charge sheet against the bank and the seven former employees since he is satisfied with the evidence.

The letter is part of an affidavit that was filed by the DPP in a case where Family Bank is seeking to stop him from prosecuting it.

Thuku and company secretary Rebecca Mbithi told Justice Edward Muriithi that the decision to charge them—while no action has been taken against 27 other banks that handled or transacted the NYS funds—is a violation of the Constitution.

The letter seeks to demonstrate that the DPP has evidence against the bank and its former employees and that investigations against the other banks have started.

The DPP told the DCI to also look into whether there is any culpability or complicity on the part of the Central Bank and/or its officers in aiding and abetting the scandal.

He said the National Assembly Public Accounts Committee claims that the money was transferred from the Ministry of Devolution and Planning account held at the Central Bank of Kenya.

Post a comment
WATCH: The latest videos from the Star
by OLIVER MATHENGE @OliverMathenge
News
25 November 2016 - 05:00
Read The E-Paper