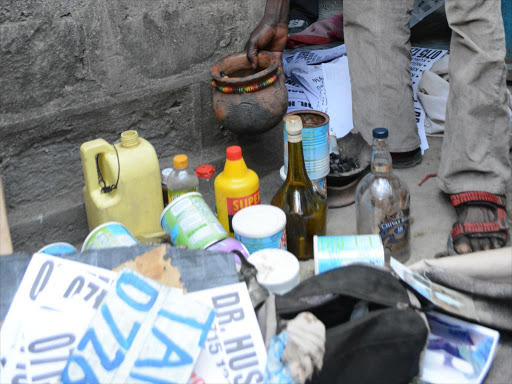 A suspected witch doctor parades his tools of trade after he was cornered by irate members of the public in Karagita estate, Naivasha, November 17, 2016. /GEORGE MURAGE

They moved door to door looking for the "traditional healers" accused of being behind their woes.

Trouble started two weeks ago when two children were reported missing and later found murdered in what are believed to have been ritual killings.

Police are holding a 12-year old boy in connection to the mysterious murders.

During the raids, residents found paraphernalia used by witch doctors to 'treat' their patients.

Pictures of church pastors, women, and men from neighbouring areas were also found in one of the homes that was raided by more than 300 residents.

Youth leader Elijah Ngotho said the witch doctors were to blame for the disappearance of the minors in the area.

He said the operation was meant to rid the area of fake healers, a majority of whom he noted were from neighbouring countries.

"Through the Nyumba Kumi initiative that is working very well here, we decided to carry out impromptu raids to find out who exactly is behind the disappearance of our kids," he added.

Elder George Kafa said the number of witch doctors was on the rise in the village as residents have different ethnic backgrounds.

He said they were shocked by what they found in the homes and called on landlords to ensure they looked into their tenants.

Some of the people whose homes were raided were arrested. Robert Mageni, from Uganda, admitted that he was in the country illegally.

Mageni initially denied taking part in the practice but later said some of the villagers were his clients.

But he added: "We have nothing to do with the disappearance of children. We are also parents and what we do is well known."

Mageni's colleague Juma Karemba, who is also from Uganda, said their business was much like any other.

"We have not committed any crime by being in this business. Kenyans also come to our country and do the same. We should be allowed to operate in peace," he said.

Post a comment
WATCH: The latest videos from the Star
by GEORGE MURAGE
News
17 November 2016 - 15:00
Read The E-Paper