Trump could kick 30,000 Kenyans out in January 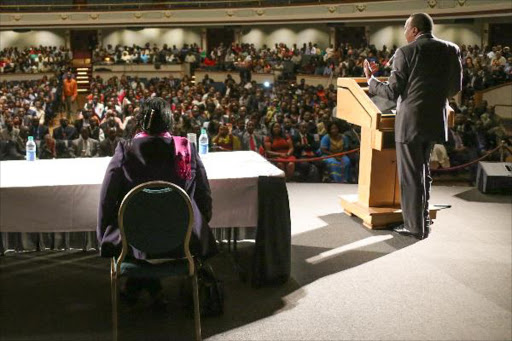 President Uhuru Kenyatta addresses the Kenyan diaspora in Massachusetts at Lowell Memorial Auditorium in US. Photo/PSCU

An estimated 30,000 Kenyan illegal immigrants are now at imminent risk of being deported from the USA back to Kenya.

On Sunday Donald Trump said that he wants to deport three million illegal immigrants "immediately" he becomes President in January.

There are around 11 million illegal immigrants in the USA who Trump threatened to deport while he was on the campaign trail. Many illegals were hoping that he would tone down after winning the election but it is now clear that Trump will not backtrack on his hardline immigration policy.

The International Organization for Migration in 2015 estimated in 2015 that 30,000 Kenyans are irregularly residing in the United States alone.

"These numbers are derived from visa admissions statistics and data from the US Census Bureau," the IOM report says.

The US Department of Homeland Security estimate that the number of illegal Kenyans in the US multiplied by seven between 1990 and 2013.

According to the US Census Bureau, there were an estimated 106,484 Kenyans residing in the US in 2013, including those there illegally.

At least 62,858 were in employment with most of the reminder in school or too young to be enrolled.

Half of the money sent to Kenya from the diaspora comes from the US and Canada.

According to Central Bank of Kenya data, Kenyans sent home around Sh165 billion in the year up to June 2016, with Sh85 billion of it coming from North America. Remittances are a bigger foreign exchange earner that tea, flowers, coffee or tourism.

Kiraithe said that it was not part of "Kenya's national pride" for its citizens in foreign countries to "play hide and seek with the law."

"We are glad that he ( Trump) is targeting criminals. For the other Kenyans who might have reached there for whatever reason, we would urge them to stay within the legal system of the United States," Kiraithe said.

"You do not have to stay anywhere illegally. There are enough opportunities here," he said.

"There are many Kenyans who are farmers and others are herders and they are making it. So if someone cannot be accommodated legally in another country, the earlier they take a flight and come back home, the better," Kiraithe said.

In the same period, 34,233 Kenyans received US permanent residency. In 2014 alone 27,425 Kenyans visited the US for various reasons.

In that period, 49 Kenyans went to the US as refugees while 568 were received as asylum seekers.

The total number of undocumented Africans in the US is estimated at around 300,000 out of an estimated total of 11.4 million illegal immigrants who Trump wants to deport.

"What we are going to do is get the people that are criminal and have criminal records, gang members, drug dealers, where a lot of these people, probably two million – it could be even three million – we are getting them out of the country or we are going to incarcerate," Trump told CBS News on Sunday.

Critics believe that Trump will be prevented by the legal system from deporting illegal immigrants in his effort to "Make America Great Again".

And his critics also argue that logistically it could take him 30 years to deport this first batch of three million illegals.

It is still not clear what Trump's foreign policy on Africa will be as he rarely mentioned it during his campaign.

However there is concerns that the warm relations that Kenya has enjoyed with the Obama administration may be under threat.

The US established diplomatic relations with Kenya in 1964, following independence in December 1963.

Relations became closer after Kenya's democratic transition of 2002 when the opposition united to remove Kanu from power.

President Obama visited Kenya in July 2015, the first sitting US President to visit the country.

Recently the US has been helping Kenya to fight corruption and terrorism. The US has provided equipment and training to Kenyan security forces, both civilian and military.

In trade, Kenya is eligible for preferential trade benefits for apparel, coffee and tea under the African Growth and Opportunity Act. American exports to Kenya include agricultural products, aircraft, and machinery.

US business investment is primarily in commerce, light manufacturing, and tourism.