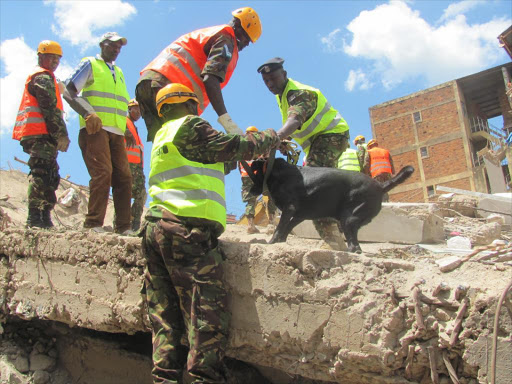 Kenya Defense Forces officers with a sniffer dog on arrival in Kisii on Friday at the site of the building that collapsed on November 11, killing nine. /FILE

The death toll at the collapsed 10-storey building in Kisii town has risen to nine after two more bodies were retrieved on Saturday morning.

Pius Masai said that the number could be higher.

The two male bodies were retrieved

on Saturday morning, one at 2am and another at 8am.

On Friday, one of the victims succumbed to injuries at the Kisii Teaching and Referral Hospital.

Ondari said that 17 out the 44 admitted have since been treated and discharged.

Three people are said to be in critical condition with multiple fractures.

is leading the team of 30 KDF officers who have been deployed with sniffer dogs and special equipment for rescue operations.