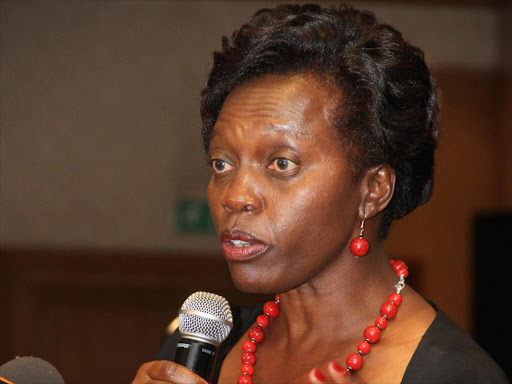 Kakamega Senator Boni Khalwale on Thursday had a bitter exchange with Narc Kenya leader Martha Karua after she threw her weight behind the President's re-election in 2017.

Karua said she had no problem with supporting Uhuru Kenyatta as she intends to vie for the Kirinyaga Governor seat.

"Kudos @MarthaKarua for your decision to support @UKenyatta. Like Peter Kenneth who came before you, You had no votes you were going to deliver to Cord. Bye!" Khalwale said on Twitter.

But in a quick rejoinder, Karua replied: "@KBonimtetezi @UKenyatta I was never in Cord but merely working with opposition!"

Khalwale said he respects Karua's decision adding, "He/She who fights and runs away lives to fight another day."

Kenyans on twitter asked Khalwale to focus on making Cord stronger and stop being petty.

Melville said "@KBonimtetezi @MarthaKarua @UKenyatta roots are the primary focus. Let's hope she didn't get near our kitchen. The recipe may be leaked."

Karua defended the opposition at a time when anti-IEBC demonstrations were being held, saying it was their constitutional right to do so.

They accused the electoral body of colluding with the government to rig polls and of corruption, which he has been saying has been rampant under Uhuru's administration.

In August, Karua demanded that Jubilee leaders respect her association with the opposition.