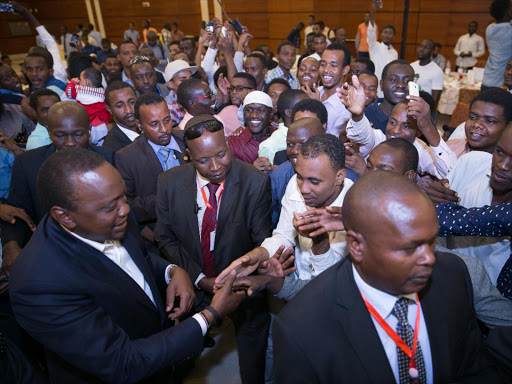 President Uhuru Kenyatta shakes hands with Kenyans who work and study in Sudan during a meet and greet session at the Corinthia Hotel, Khartoum, on Sunday, October 30, 2017. /PSCU

President Uhuru Kenyatta has urged Kenyan students studying in foreign universities to apply for loans at the Higher Education Loans Board.

The President said government’s policy is to ensure every Kenyan student studying in accredited universities abroad benefit from the fund.

“That is why even those in private universities are offered loans,” said the president.

The head of state said this when he met more than 500 Kenyan students in Khartoum, whom he addressed on the second day of his official visit to Sudan.

“We have a clear policy that all Kenyan students whether at home or abroad qualify for HELB loans,” said the President in his address at the Corinthia Hotel, Khartoum.

The President encouraged the students to enroll more for courses in the oil and mining sector in which Sudan has an edge.

He told the students that he has requested the Sudanese government to offer internships in the petroleum and oil industry to Kenyan students.

“There is a lot we can learn from Sudan especially in oil and gas and mining,” said President Kenyatta.

He asked the students to maintain their distinction as well behaved Kenyans.

“You are here as our ambassadors, continue promoting our good name,” said the President

when responding to requests from the students for government support.

Uhuru said the Government will dispatch officials from the ministry of education and HELB to take records of the many Kenyan students studying in Sudan who may need help.

He also urged the Kenyan students to take advantage of the policy that allows for credit transfers to Kenyan universities during their final year of studies.

The meeting was addressed by Foreign Affairs CS Amina Mohamed and the Kenyan Ambassador to Sudan Arown Suge.