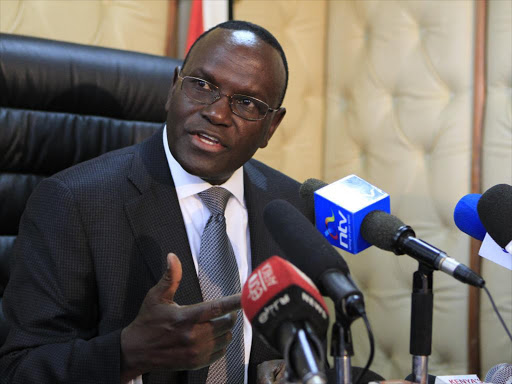 pocketed millions of shillings in the Sh5.3 billion "HealthGate" or “Mafya House” scam — a Jubilee nightmare.

This brings the country's corruption crisis to the President's doorstep.

They own Sundales International Limited, registered on September 12, 2013 – five months after Uhuru's election.

The Star's independent investigations show the company has been awarded government contracts running into hundreds of millions.

Between September 2014 and February this year, for instance, Sundales won at least five separate tenders from the Kenya Medical Supplies Authority — worth Sh270 million.

The deepening graft crisis, 10 months to the polls, complicates Uhuru's re-election strategy. It comes just days after he appeared to surrender and publicly admit he was frustrated in the anti-graft war.

“...if there is one issue that has frustrated me, it’s this issue [corruption] ...Because the pressure is on me . . . show me one administration, since Independence, that has taken action on corruption like I have done?” an agitated Uhuru protested on October 19. He addressed a State House summit on accountability.

The Sh41 million wired to the firm was supposedly payment to supply food to HIV patients.

It is part of Sh515.7 million an internal audit has flagged as possible fraud.

The details emerged yesterday amid revelations Estama Investment Ltd, one firms that pocketed Sh800 million, had not filed annual returns since its incorporation on June 19, 2008.

These revelations put pressure on the President, days after he blasted Auditor General Edward Ouko who has issued reports that embarrass the government and attempted to probe the Eurobond saga.

Nyokabi, born in May 1963, is Mama Ngina's second-last born. She is listed as director of Kenyatta Trust charity for poor students.

Kathleen, Uhuru's first cousin, is said to be an exuberant communications and PR guru. She supervised the media wing of Uhuru's 2002 presidential campaign against Mwai Kibaki.

Alongside Solicitor General Njee Muturi, she worked at Uhuru's Red Cross Center when led the opposition.

The Star has established Sundales won two tenders at Kemsa through restricted tendering.

From its website, the firm's directors appear to have a massive war chest. It supplies heavy equipment, spare parts, construction materials, non-pharmaceuticals, food and a full range of printing services.

Yesterday, Attorney General Githu Muigai denied files of companies named in “HealthGate” had mysteriously disappeared from the Registrar of Companies.

Ngari is said to be a General Manger at Equity Bank.

“According to the records, no annual returns have been filed since incorporation. It's a private company limited by shares that was incorporated on 19 June 2008,” Githu's statement said.

Ndung'u was among top 10 shareholders in Kenya Airways, Housing Finance and Olympia by 2010 and his shares in them were then valued at Sh576 million.

The audit says the amount lost could be of monumental proportion because the audit process is ongoing.

“The audit is experiencing setbacks in terms of facilitative environment contributing to slow delivery of audit work, which is necessary in management, decision making and fraud-risk mitigation,” the report says.

For instance, the audit says Sh515.7 million was lost through double payments under the National Aids Control Programme. It was to buy food rations for HIV patients, though no payment vouchers were availed for audit.

“Some Sh265.7 million was paid to Cooperative Bank of Kenya. The bank cannot be a supplier of food and rations and hence the real payees were not disclosed,” the audit says.

Post a comment
WATCH: The latest videos from the Star
by FELIX OLICK AND DOMNIC WABALA
News
29 October 2016 - 03:00
Read The E-Paper