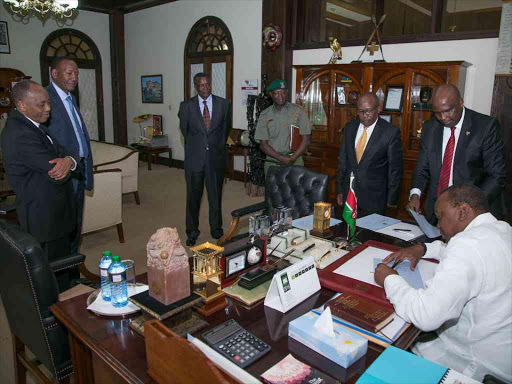 Invoking the Power of Mercy provided by Article 133 of the Constitution, he also signed a pardon warrant and released 102 long-term convicts. The reprieve for the 102 convicts came after a thorough vetting by the Power of Mercy Advisory Committee.

The last commutation of death sentences to life imprisonment was done in 2009 by President Mwai Kibaki.

The Power of Mercy is a prerogative conferred on the President by the Constitution and entails granting pardon to reformed and rehabilitated convicted criminal offenders, who deserve early release from prison.

This development comes only days after the President pardoned 7,000 petty offenders who were about to complete their sentences.

Making the announcement during this year’s Mashujaa Day celebrations in Kenyatta Stadium, Machakos, Uhuru once again urged the judiciary to speed up graft cases pending in court.

Capital punishment was formally introduced into the Kenyan legal system by the British during the colonial era. After Independence, the country continued to apply the penalty.

However, no executions have been carried out in Kenya since 1986, when Hezekiah Ochuka and Pancras Oteyo Okumu were hanged for treason. In June, the Power of Mercy Advisory Committee embarked on a countrywide campaign to collect views from Kenyans on capital offences and the death penalty.

“The objective of the debate is to provide an open dialogue on what Kenyans want, with regard to handling capital offenders and capital offences,” Kagika said at the time.

Post a comment
WATCH: The latest videos from the Star
by OLIVER MATHENGE @OliverMathenge
News
25 October 2016 - 03:00
Read The E-Paper