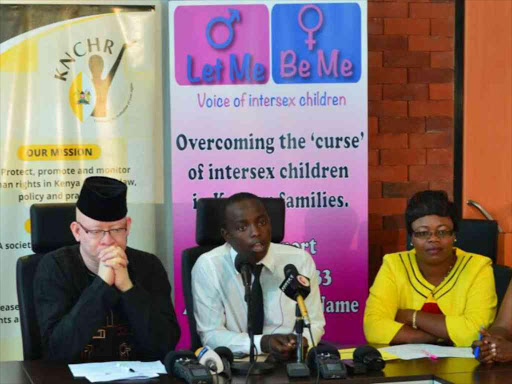 James Karanja, an intersex takes about the discrimination he has gone through from his family and community as a result of his condition at Kenya National Human Rights Commission Offices on October 19, 2016 /RHODA ODHIAMBO

Kenya will for the first time celebrate the International Day for the intersex child next week.

Gama Africa, an NGO, will lead a procession from Michuki’s park to Parliament buildings with the aim of raising awareness about the condition.

“The campaign around this walk is called 'Let me be me'. We want people to accept intersex persons and stop harassing them,” Gathoni said.

Gathoni, who is the founder of the organization, said they have recorded a total 132 intersex cases.

Out of this number, 60 per cent dropped out school because of the harassment and treatment they received from their peers and their teachers.

“We have lost two intersex children who took their own lives in Meru and Baringo counties as a result of the discrimination. We should stop discriminating these children because it is not their wish to be born like that,” Gachomba added.

James Karanja, who is an intersex child, said that some cultures have been on the fore front saying that intersex children are a curse to the community.

He added that majority do not have identification cards and therefore they can not be employed.

“People always judge me by what is between my legs than what I can offer to my country. I did not wish to be born with two organs. I am not abnormal, I am just different. I have even

contemplated committing suicide so many times after being rejected by my own family,” Karanja said.

Advocate John Chigiti and commissioner Jedidah Waruhiu from the Kenya National Human Rights Commission urged the government to come up with more laws that can be used to advocate for the rights of intersex child.

"Apart from the coming up with better legislations for this group, we also want the government to have a data base on the number of intersex persons in the country.

It is estimated that in one in every 2,000 children born each year globally are intersex. If those are just global estimates, what is the Kenyan figure? posed Jedidah?

Nominated MP Isaac Mwaura presented a petition in parliament to pass a law to recognise intersex persons in August this year.

Mwaura is also asking for funding for gender alignment surgery and a public awareness campaign.

Post a comment
WATCH: The latest videos from the Star
by RHODA ODHIAMBO , @OdhiamboRhoda
News
20 October 2016 - 09:00
Read The E-Paper