I have played my part in corruption fight –Uhuru 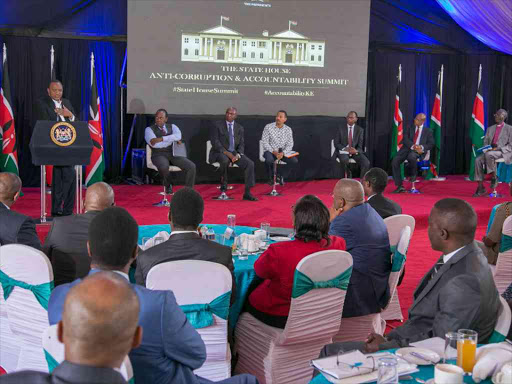 President Uhuru Kenyatta, senior State officers and the Judiciary yesterday engaged in a blame game over the failing war on graft.

And the President publicly admitted he was “frustrated”, on live TV in an event beamed nationwide.

An agitated Head of State rebuked government agencies, including the Judiciary, for the stalling war on graft and said he had done all within his powers, including suspending and then sacking ministers.

Speaking at the State House Governance and Accountability Summit, President Kenyatta hit out at the anti-graft agency, the Director of Public Prosecutions and the Directorate of Criminal Investigations.

He blasted Auditor General Edward Ouko for attempting to extend investigations of the Sh250 billion Eurobond cash to the Federal Reserve Bank of New York, in the US.

“And this one [Ouko] is saying he wants to go and investigate the Federal Reserve Bank of New York. Ngai! You know, you sit back and you ask yourself, are we being serious in what we are doing? Or is it just a joke because the newspapers will report it?” Uhuru exclaimed.

He said his administration had given all the necessary resources to the Judiciary and the investigating agencies and expressed disappointment Kenyans are not seeing results.

“Personally, I am not shielding the corrupt. It’s you people who have failed in your jobs,” Uhuru said at the summit attended by senior members of the all the three arms of government.

“And I want to say that, as President, if there is one issue that has frustrated me, it’s this issue [corruption], and I would say why. Because the pressure is on me . . . show me one administration, since Independence, that has taken action on corruption like I have done?”

The Judiciary, represented by the acting President of the Supreme Court, Justice Paul Kihara, was blamed for resolving very few corruption cases, even though there are hundreds of cases pending.

Director of Public Prosecutions Keriako Tobiko protested the courts have only resolved 198 cases between 2009 and 2016.

“As we speak now, as of October 12 this year, we have in court 873 individuals and 22 companies facing very serious corruption cases. Four hundred and seventy-four of them are high-profile individuals,” Tobiko revealed.

But Justice Kihara hit back, claiming the prosecutors are also inept.

“The DPP is right here, I don’t want to pass the buck, but he knows very well that we have had to send cases back because either prosecuting counsel did not show up, or, if they show up, they are ill-prepared,” Kariuki said.

EACC boss Halakhe Waqo accused the Judiciary, especially the magistrate’s courts, of being too lenient.

“We arrested a magistrate in Kericho with money in her bag, took her to court in Nakuru and her colleague acquitted her,” said Waqo, with Tobiko weighing in that the Nakuru magistrate failed to give reasons for the acquittal.

But Uhuru blamed the EACC for advising him to fire his Cabinet secretaries, yet they had no tangible evidence to nail them two years later.

Some of the fired ministers, he said, “hate me” and are now waging a 2017 onslaught against his reelection.

“You, Waqo, made me stand in Parliament: I sacked ministers and the others, who are now blaming me,” Uhuru protested.

The Head of State said his hands were tied because he lacks the powers to hire and fire independent-office holders, judges, as well as the Chief Justice.

In what appeared to be a swipe at Opposition chief Raila Odinga, Uhuru said corruption should not be used to score political goals.

Raila has pegged his 2017 State House bid partly on what he says is Jubilee’s inability to decisively deal with graft.

On Sunday, Raila warned against granting Kenya another Eurobond loan before the current one – issued in June 2014 – is fully accounted for.

Last month, Ouko said there is no proof of “receipt of expenditure” of the first Eurobond billions anywhere in some ministries.

“The inability by the government to account for expenditures of the Eurobond places Kenya at the risk of sovereign default,” Raila warned.

But yesterday, Uhuru challenged Ouko to name those who embezzled the Eurobond cash.

“The Auditor General keeps on saying money was stolen from Eurobond . . . What is your problem? If it’s stolen, say it. Say, ‘it was stolen by Uhuru, or so-and-so’. But all the time, ‘we are investigating, oohhhh’ – nonsense!” an angry President said.

Uhuru said he was disappointed that some ardent government critics, including anti-graft Czar John Githongo, had skipped the summit.

Githongo and economist David Ndii are among accountability crusaders who had been invited but gave the summit a wide berth.

Only Transparency International boss Samuel Kimeu and Houghon Irungu, director of the Society for International Development, were present from civil society.

Just last week, Githongo blasted the Jubilee government, labelling it the most corrupt regime to ever rule Kenya.

Githongo laid the blame squarely at Uhuru’s door, saying he has not provided the much-needed political will to wage the war on corruption.

Post a comment
WATCH: The latest videos from the Star
by FELIX OLICK @olickfelix
News
19 October 2016 - 03:00
Read The E-Paper