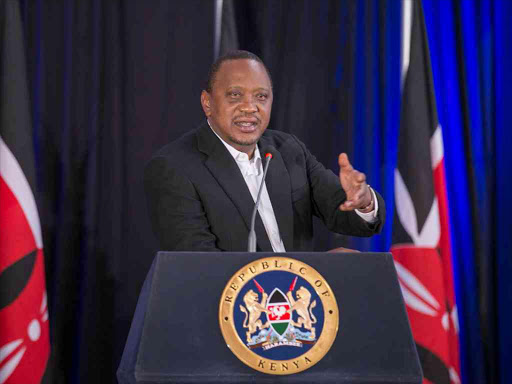 Kenyans known for giving people dressing downs via Twitter, have turned against President Uhuru Kenyatta, who said he is frustrated by corruption.

Through hash tag #CryBabyPresident, members of the public asked Uhuru to solve his problems rather than air frustration on live TV.

Uhuru said on Tuesday that he has provided resources yet officials keep complaining about lack.

He said he was not the one harbouring the vice and that there was nothing he could do to the officials, especially where authorities have not concluded investigations.

"Corruption is frustrating me. The pressure is on me to do something about corruption but my hands are tied," he told the accountability summit at State House in Nairobi.

The Latest Cry Baby in Town

Other social media users mocked the President, wondering what they could do in their capacity as citizens, where Kenya’s leader has failed.

When Our beloved president is frustrated with corruption how can we say on Ngaiseri with Alshabaab?

Whenever Uhuru speaks without those written speeches, expect his other life to become visible.Kamwana.

During the summit, Uhuru put the Auditor General on the spot for saying he will investigate the Federal Reserve Bank of New York over missing Eurobond proceeds.

Uhuru laughed off AG Edward Ouko plan saying many Kenyans do not understand the investigative process and think the organisation is owned by a local.

what is wrong with Auditor General doing his constitutional duties? You are doing yours crying!

If only our Prezo converted the meat eating energy and effort to fighting corruption, there will be no blame game

indeed Kenya is a crying nation!Uhuru deserves the mockery cos all he has done is pull us back to protect his own interest

The President is obligated to give progress reports on the achievement of national goals.

He has previously done this through State of the Nation Addresses, in which he has assured commitment to the war on corruption.

According to the constitution,

(a) address the opening of each newly elected Parliament;

(b) address a special sitting of Parliament once every year and may address Parliament at any other time; and

(i) report, in an address to the nation, on all the measures taken and the progress achieved in the realisation of the national values, referred to in Article 10;

(ii) publish in the Gazette the details of the measures and progress under sub-paragraph (i); and

(iii) submit a report for debate to the National Assembly on the progress made in fulfilling the international obligations of the Republic.