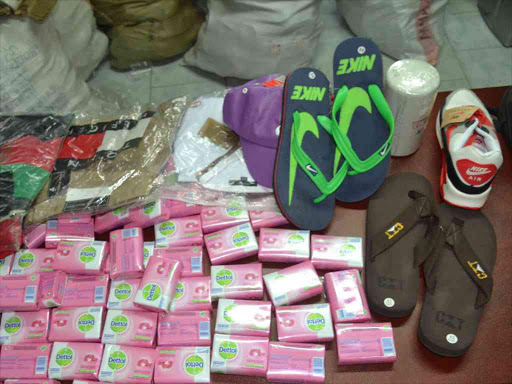 Some of the counterfeit goods intercepted by the Anti-Counterfeit Agency at the weekend. /MKAMBURI MWAWASI

Six Mombasa residents are being investigated in connection to the sale of counterfeit goods valued at Sh5 million.

Ibrahim Bulle, Mombasa anti-counterfeit regional coordinator, said they were arrested at the weekend as part of a two-week operation in residential areas.

Bulle said they took the action after receiving reports from customers, of counterfeit goods including soaps branded Dettol.

Also among the confiscated products were several boxes of Lauren roll-on valued at Sh2 million and Nike shoes, caps, sandals and caterpillar open shoes worth Sh 700,000.

Others were vehicle filters and anti-rust sprays.

"Investigations are ongoing to establish the origin of goods that could be toxic," said Bulle.

The regional coordinator said traders have resorted to selling low quality goods in a bid to beat competition.

But he noted the agency has stepped up operations against this as the borders are porous.

“We have opened up our offices at border checkpoints to ensure goods entering the country are legal and genuine," he said.

"We are also liaising with port police officers because some of these products find their way into the country through the port."

He urged the public to give police information that would help the fight against the low quality products.