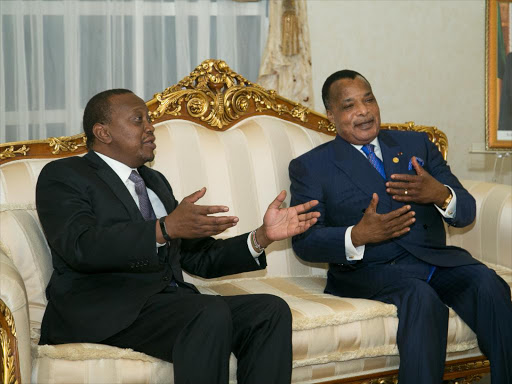 President Uhuru Kenyatta with the Republic of the Congo President Sassou Nguesso on the sidelines of the AU Extraordinary Summit on Maritime Security in Lomé,Togo, yesterday /PSCU

President Uhuru Kenyatta will tomorrow address graft allegations against his administration as he hosts a an accountability summit whose participants include some his harshest critics.

State House yesterday announced the three arms of government – the executive, judiciary and the legislature as well as constitutional commissions will participate.

Spokesman Manoah Esipisu announced that anti-graft crusaders John Githongo and David Ndii are among those invited for the summit.

Among the scandals include the Sh1.8 billion National Youth Service scam.

But Esipisu said only facts, and not chest-thumping, should be brought up at the meeting.

“This is not the space for chest-thumping and finger pointing. It is a space where only facts will be required and where Kenyans expect to see answers on the way forward in terms of the battle against graft and other lack of integrity-related vices,” he said.

Just last week, Githongo blasted the Jubilee government, labeling it as the most corrupt regime to ever rule Kenya.

Githongo laid the blame squarely at Uhuru's feet, saying he has not provided the much-needed political will to fight corruption.

“So you have a lot of movement on the anti-corruption front whereas in actual fact, in the last four years, we have moved back fairly dramatically, as far as corruption is concerned. This is by far the most corrupt government in our history,” he said in an interview with NTV.

Ndii, an economist by training has been consistent that the Sh250 billion Eurobond cash has not been accounted for and has widely published about the subject.

However by Friday last week, Githogo said he had not received any invitation for the accountability summit.

Its not clear whether Ndii had received his.

Manoah said they expect the debate will reach millions of Kenyans, and that everyone with anything to say will be open to say it.

Also invited are the Asset Recovery Agency, the Auditor General, Parliamentary Watchdog Committees as well as the the Council of Governors.

Opposition Chief Raila Odinga had accused the government of using the summits as public relations exercise with an eye on the 2017 polls.

The summit on Governance and Accountability will be followed by one on Information, Science and Technology and Innovation, also at State House Nairobi, on October 31.