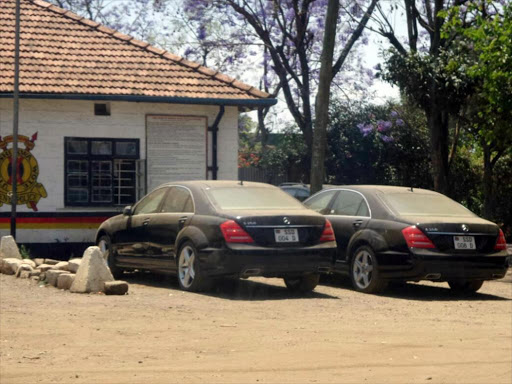 Police and Kenya Revenue Authority officials in Nairobi are investigating what is suspected to be an international car theft syndicate that smuggled eight Mercedes Benz cars in containers into Kenya from South Sudan last Thursday.

The vehicles, which have South Sudan registration numbers, are suspected to have been in transit to a neighbouring country or stolen from South Sudan by people taking advantage of the unrest and transporting them out.

The case is being investigated by a team of detectives led by the Buru Buru DCI and KRA officials.

They are liaising with the South Sudan government to establish the ownership of the vehicles and why they are in Kenya.

The eight black Mercedes Benz S350 were intercepted as they were being offloaded from the containers in a compound within Nairobi’s Majengo slums by police on patrol.

They sought verification from KRA after the truck drivers failed to give satisfactory answers on why the vehicles were being offloaded in the area.

Two South Sudanese and a Kenyan who were initially uncooperative claimed to be owners of the vehicles and said the cars were the property of the South Sudan government brought for service in Kenya.

DT Dobie, the sole Mercedes Benz dealers, are reported to have told police they are unaware and not expecting any vehicles brought to their workshop for service from South Sudan, prompting police to ask KRA to verify the documents, which turned out to be fake.

The senior police officer investigating the case ordered the trucks carrying six of the cars to be driven to Shauri Moyo police station.

Two cars that had already been offloaded were intercepted in the Industrial Area and also driven back to the same police station.

Two of the cars, registration number SSD 004D and SSD 008D are parked in front of Shauri Moyo police station.

The three trucks, one of them with Uganda registration number UAS 845B, were yesterday afternoon parked behind the station’s main building.

who had initially claimed responsibility for the vehicles disappeared.

Sources within South Sudan yesterday intimated that the cars are Government of South Sudan vehicles believed to have been stolen and smuggled into Kenya by a cartel which includes Juba government officials.

About 10 individuals, including South Sudanese nationals, Kenyans and the drivers of the vehicles, were taken to Buru Buru police station but mysteriously released and their passports returned to them without any charges.

Later, Shauri Moyo police officers were again asked to look for the same individuals that had been released but none has been rearrested.

DCI boss Ikiao yesterday said they are moving cautiously because the individuals claimed the vehicles belong to the Government of South Sudan and had been brought into Kenya for repair.

He said KRA and other players are involved in the multi-pronged investigations, but caution has to be taken because of the diplomatic immunity of some of the individuals involved.

“It is true we are detaining some vehicles at Shauri Moyo police station but no individuals have been arrested. We detained their passports after some of the questions were not satisfactorily answered. The individuals said the cars belong to the Government of South Sudan and have been brought for repairs.