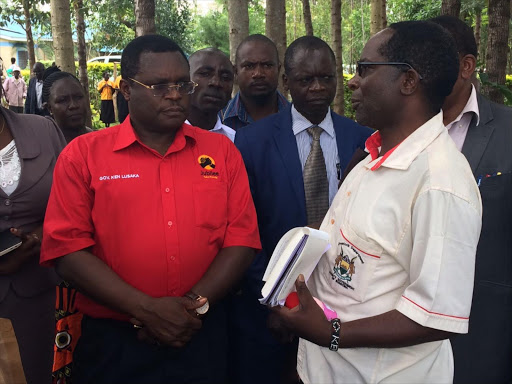 Bungoma governor Kenneth Lusaka on Wednesday dismissed petitioners who have accused him of mismanaging county funds.

Lusaka told the senate's Public Finance Committee that the petitioners relied on hearsay and some of the issues raised are currently by the EACC.

County executive committee members who accompanied the governor termed the allegations as ridiculous.

Lusaka's lawyer Peter Wanyama faulted the committee for pushing the governor to provide evidence yet the burden of proof was with the petitioners.

The petitioners want the governor and senior county officials to be subjected to a lifestyle audit and be held responsible for any loss of funds at the county.

The group wants Lusaka probed over pending bills at the county that have accumulated to Sh2.5 billion.

The petitioners have also accused the governor of allowing public funds to be irregularly transacted through personal accounts of some county employees.

On the controversial issue of stainless carcinogenic , Lusaka said the officers involved will be surcharged.

The committee was divided on how to prosecute the petition against Lusaka, which was dismissed by the latter's lawyer poorly drafted by persons who don’t understand public finance procedures.

(Bungoma) and Catherine Mukite (Nominated) wanted to cross examine Lusaka on each allegation.

The other group wanted the governor to be cross examined after reading out all his responses.

Wetang'ula and Khalwale argued that senators were likely to forget core issues if Lusaka would be allowed to read all the responses at once.

They said that, considering the voluminous documents the county boss presented as evidence, critical issues were likely to be overlooked.

However, Mositet ruled them out of order and allowed Lusaka to read out his responses.

He said senators would be given time to read the documents before they can seek clarification from the governor.

Post a comment
WATCH: The latest videos from the Star
by GIDEON KETER, @ArapGKeter
News
12 October 2016 - 18:00
Read The E-Paper