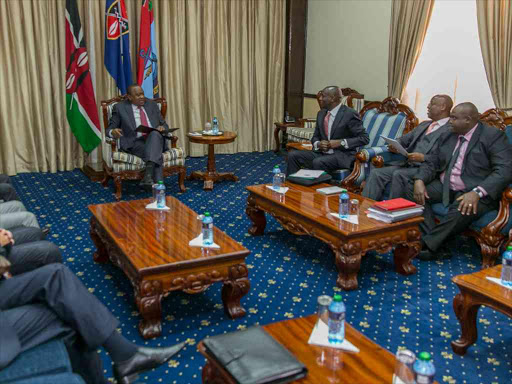 President Uhuru Kenyatta has declered vacancies for IEBC Commissioners setting the stage for the recruitement of the new electoral chiefs.

Uhuru asked the Public Service Commission to submit to him the nine names picked to sit in the IEBC selection panel that will hire the new commissioners.

He said the outgoing team lead by Isaac Hassan will now serve their notice, which will expire as new commissioners take office to avoid a vacuum.

“In this regard, there shall be no lacuna or constitutional crisis engendered by their being no substantive IEBC Commissioners in office during this transitional period,” Uhuru said through his Spokesman Manoah Esipisu.

The nine electoral commissioners and their chairman, formally resigned on Wednesday, paving way for a new team to oversee the 2017 general election.

Uhuru thanked the Commissioners for what he said was their “pivotal contribution to the Nation as the inaugural Members of the IEBC under the new Constitution”.

“The IEBC is a vital plank of Kenya’s Constitutional architecture and through their service in the Polls Body the outgoing Members of the IEBC have contributed to the growth of Democracy in our Country,”he said.

The Opposition Cord would most likely have a different opinion from that of the President on the legacy of the outgoing team.

Cord Leaders led by Raila Odinga have had a poisoned relationship with the Hassan team and accuses them of ringing the 2013 polls for Jubilee.

The four now join the other five representatives selected by religious organisations in the interviewing panel.

Others are Bishop David Oginde representing the Evangelical Churches of Kenya (EAK) and Ravindra Bhurma for the Hindu Council of Kenya (HCK).

After the formal appointment of the selection panel by the President, the team will advertise for the positions of IEBC Chair and seven commissioners.

They will then conduct the interviews and then forwards the names of successful candidates to the President.

The Head of State will then send the names to the National Assembly for vetting before eventual appointment by Uhuru.

The selection panel must however give Uhuru 9 candidates to pick only six commissioners and two names to pick as IEBC chair.

Cord lawmakers had strongly opposed this provision which was passed during negotiations between Jubilee and Cord.

Raila endorsed the report but asked Uhuru to consult the Opposition before picking the Commissioners.