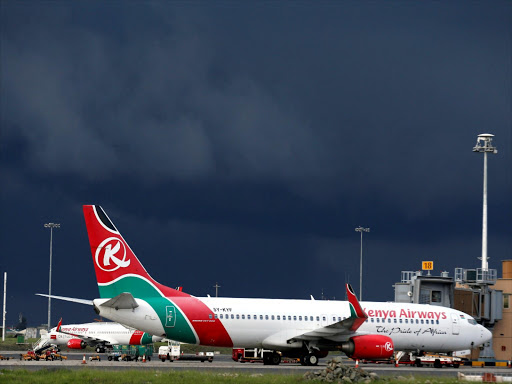 Only one Kenya Airways flight was cancelled on Sunday due to technical hitches, the airline has said, dismissing reports of a grimmer situation.

A statement on Monday denied reports that

were cancelled and others delayed for more than eight hours

Thousands of passengers, including

were stranded at the JKIA in Nairobi.

Sources said KQ told passengers of an “imminent delay due to technical reasons”, but the national carrier said hitches were addressed.

“Kenya Airways wishes to reassure its passengers that the operational challenges experienced over the weekend, that led to inadvertent delays, have been addressed,” read the statement.

on the Mombasa operations for KQ 608/9 and the afternoon Jambojet flights.

"Jambojet was experiencing non-availability of two aircraft, which led to significant delays. These flights were fully recovered albeit inconvenience to our flying guests," the airline said.

KQ further noted said that one of the airline’s B787 Dreamliners experienced a technical problem in Hanoi, Vietnam,

It said this was the first of such an occurrence

on the worldwide 787 fleet, and that Boeing's assistant had to be sought.

Boeing representatives and the airline's engineering support team looked into the problem but it took long for operations to be restored, the statement said.

As part of the recovery of operations from Hanoi, the airline said it experienced some problems with getting its guests re-booked to other flights and carriers.

“Our guests on this disrupted flight have or will receive a letter with background information, as well as a reasonable compensation for this disruption," KQ said.

"On behalf of the Kenya Airways group, we apologise most sincerely to all our guests whose journeys were disrupted and assure you of our continuing focus on schedule integrity."

per cent for the entire network and 81 per cent domestically.

There had been speculation that the airline's technical department was on a go-slow over poor management.