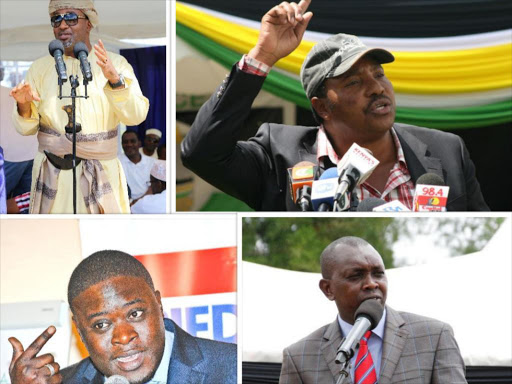 Top political leaders and high State officers are caught up in an academic certificate forgery fiasco that threatens their professional and political careers only 10 months to the 2017 polls.

The latest to be mired in the potentially damaging farce is Jubilee rebel MP Oscar Sudi (Kapseret), who joins a long list of prominent personalities, including governors, MPs and top civil servants.

Yesterday, the Ethics and Anti-Corruption Commission revealed that more public officers who possess forged academic papers will be arraigned in court.

told MPs that investigations are ongoing to establish the validity of the academic papers of various public servants, including legislators, senior and junior government officers.

“The Ethics and Integrity department is conducting investigations into fake certificates for public servants. It will be shocking to see some in court,” he said.

Commission for University Education also warned that those who are caught with fake academic certificates will face the law.

“We authenticate certificates both from local and international universities. This is a warning to both leaders and individuals who will be found

possessing fake academic papers that they will be nullified," CUE chief executive David Some told the Star yesterday.

On Thursday, in a report forwarded to Parliament, the EACC said Sudi has fake academic papers and recommended that the Director of Public Prosecutions prosecute him.

The report says the vocal legislator presented forged certificates to the Electoral Commission as he sought nomination in the run-up to the 2013 General Election. Sudi's Diploma Certificate in Business Management and Kenya Certificate of Secondary Education certificate were forged.

According to the document, investigations had further revealed that the MP made a false declaration under oath through a self-declaration form to the IEBC.

“The MP uttered the said forged documents to the IEBC and EACC with intent to deceive the two commissions,” the report reads.

The report, whose findings the

that the MP be charged with three counts of forgery, contrary to Section 349 as read with Section 345 of the Penal Code.

The degree and diploma certificates of some key leaders, including governors, MPs and heads of government bodies, have previously been

subjected to security authentication, after questions were raised on how they were acquired.

Some are still under investigation, while others ended up in the courts.

In March this year, the Star exclusively reported that

Mtengo (ODM) was involved in forgery of academic papers to secure employment at the Kenya Ports Authority.

The documents, furnished by State agencies, showed that Mtengo submitted forged Kenya Certificate of Secondary Education and first degree certificates to the KPA during his employment and subsequent promotions.

Mtengo worked at the KPA from 1998 to 2011, where he rose through the ranks from cadet trainee to public relations officer and finally personal assistant to the managing director in 2006.   He was later promoted to Resident Representative, Great Lakes Region, Grade HM 1.

According to the documents, the ODM legislator, who was elected in the March 7 by-election, submitted a forged KCSE certificate that showed he was cleared from Kenyatta High School in Mwatate, Taita Taveta, in 1992 and subsequently attended Schiller International University in Germany.   At the German university, he attained a Bachelor of Science and Hospitality degree in 1996, the forged documents indicated.

Mtengo has since denied forging the certificates, saying that those making the claims are malicious.

He insisted he sat his Kenya Certificate of Primary Education exam at Malindi HGM in 1986 and gave his certificate number as 337466.

But a letter dated July 22, 2011, by the then head teacher Julius Ngondo, refutes claims Mtengo went to the school. MPs are required to have post-secondary education.

Ferdinand Waititu has also been challenged regarding the authenticity of his academic certificates.

Kiambu Governor William Kabogo, who has filed a suit in court, argues that Waititu is not the Clifford Ndung'u Waititu named in his academic papers.

It is reported that Waititu applied for a change of name in the run-up to the 2013 general election.

Kabogo told the court, “Ferdinand Ndung'u Waititu, whose birth was registered on January 4, 1980, cannot be the same person as Clifford who sat CPE at Mbagathi Primary in 1975.

“Clifford's index number at Mbagathi Primary School was 5209047. He proceeded to Dagoretti High School in 1981 and later to Panjab University in Chandigarh, India, in 1985.”

Kabogo claimed the MP changed his name in 2013 to acquire all academic papers needed to vie for governor.

Waititu maintains he was at Panjab University, SGGS College, from 1985 to 1988, when he graduated with a Bachelor of Commerce degree, Second Class Honours, Upper Division.

Mombasa Governor Hassan Joho has had to defend the authenticity of his degree certificate from Kampala University.

Just before the 2013 election, Joho was cleared by the High Court in Nairobi after which his opponents moved to court in Mombasa, arguing that the degree was not genuine.

Kampala University Vice Chancellor Badru Kateregga, in a signed statement, declared that Joho was a bona fide student of the institution.

NGO Coordination Board chairman Fazul Mahamed, aka Mahamed Yusuf, has also been fighting allegations that he did not graduate from Egerton University.

The Registrar of Academic Affairs, Prof SFO Owido, said Mahamed Yusuf, as he was known in college, was discontinued by the senate on academic grounds in his third year on August 26, 2010.

However, his CV shows he graduated with a Bachelor of Science in Biochemistry in 2009.

In a letter to the National Council of NGOs dated September 10, Owido says Fazul was admitted as a regular student in 2007 to pursue a Bachelor of Science in Agriculture.

He changed the course through an inter-faculty transfer on September 27, 2007.

Fazul was discontinued for failing 50 per cent, or more, of all the credit factors taken in the ordinary exams of one academic year.

Fazul has since dismissed the allegations as malice.

In 2013, the High Court nullified Kajiado governor hopeful Taraiya ole Kores’s nomination certificate. He was vying for the position on the TNA ticket but the CHE discredited his education credentials.

Post a comment
WATCH: The latest videos from the Star
by GIDEON KETER @ArapGKeter
News
01 October 2016 - 03:00
Read The E-Paper