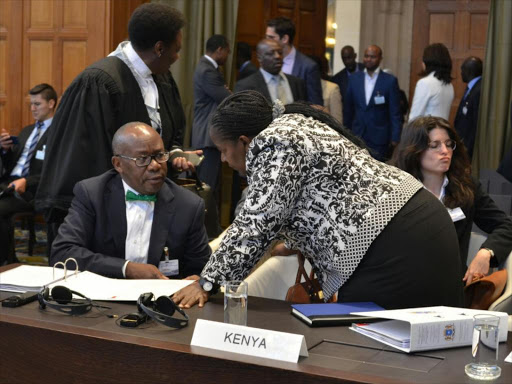 Attorney General Githu Muigai at the ICC on Wednesday /ICC

Kenya is set to mobilise Africa in a new fight with the ICC after judges at The Hague-based court referred the country to the Assembly of States Parties for non-cooperation.

The court referred Kenya to its peers at the ASP, claiming

the government refused to cooperate when it sought President Uhuru Kenyatta’s bank records and phone logs.

Attorney General Githu Muigai yesterday indicated that Kenya would not accept the court’s verdict. But he said he does not expect the matter to arise at the November ASP.

“We have to fight the resolution at the ASP if it is brought there. That forum has no appetite for another round of fights with Africa,” the AG told the Star from The Hague.

The decision by the ICC may trigger renewed calls by Kenya for the African signatories to the Rome Statute to withdraw.

Already, a Bill seeking to repeal the International Crimes Act, which domesticates the Rome Statute, is before the National Assembly.

The Bill is expected to be passed after October 4, when MPs return from recess and should be passed before the ASP scheduled for November 16.

Even if the Bill becomes law, Kenya will still participate in the upcoming ASP as withdrawal is only effected after a year. In May, Kenya spelt out the reforms it wants at the ICC in exchange for shelving its threat to withdraw.

Kenya has been leading a group of African ministers drafting the amendments to be presented for adoption at the November ASP.

The country wants immunity from prosecution for sitting heads of state and senior government officials in office. It also wants the recognition of the primacy of African judicial systems and the African Union before a case is deferred to the ICC.

Kenya also wants the UN to have a say in the deferral of cases started through the prosecutor’s initiative. It is also pushing for the reduction of the powers of the ICC prosecutor.

Kenya wants the rules on offences related to the administration of justice amended to block the court from pursuing arrest warrants issued against three Kenyans over alleged interference with witnesses.

The court on Monday said the ASP would be best placed to address the lack of cooperation to provide an incentive for the Kenyan government to cooperate with the court.

“Noting that the case against Mr Kenyatta has been already terminated and considering the relevance of the materials sought, Trial Chamber considered a referral to the ASP appropriate for the purpose of fostering cooperation more broadly for the sake of any ongoing and/or future investigations and proceedings in the Kenyan situation,” the court said.