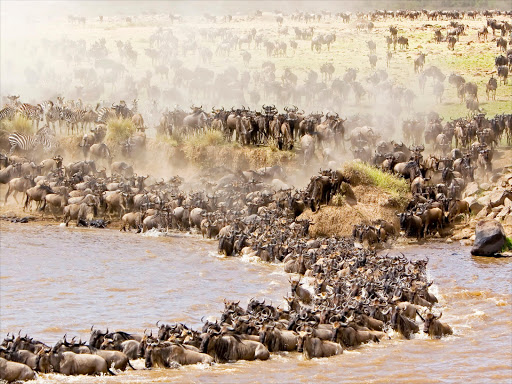 Go on and enjoy your own borders

The spectacular wildebeest migration will be streamed live for wildlife lovers worldwide from Tuesday.

WildEarth, in partnership with HerdTracker, will carry this out at the Masai Mara National Reserve from September 20 to 25.

The live broadcasts will be hosted daily on HerdTracker's Facebook page and WildEarth's safariLIVE YouTube channel between 4pm and 11.30pm.

Viewers will watch wildebeests crossing the Mara River which is infested with Nile crocodiles, and the predatory action of lions hunting at night.

"After the sun has gone down, we are going to use infrared lighting and thermal imaging," he said in a statement on Tuesday.

“The wildebeest migration is one of nature’s greatest spectacles. The river crossings are the main reasons why thousands of travellers flock to the Masai Mara every year," he said.

"We want to show the world just why they need to witness it for themselves here in Kenya."

HerdTracker is a web-app that tracks the wildebeest migration in real-time.

In October 2015, the company hosted #MaraLive

in partnership with Make It Kenya.

The event was the world's first live web broadcast of the wildebeest migration via Twitter's Periscope app.

Post a comment
WATCH: The latest videos from the Star
by GILBERT KOECH @KoechJunior_1
News
20 September 2016 - 12:00
Read The E-Paper