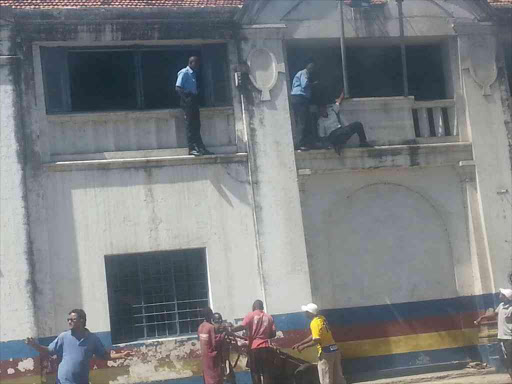 The government is investigating whether the Islamic State terror group was involved in last Sunday’s attempted attack on the Mombasa Central police station, spokesman Eric Kiraithe has said.

Kiraithe said on Friday details of the probe cannot be made public at the moment, owing to ongoing cases surrounding the attack.

“However, there is clear evidence that the plotters of the attack were communicating with a lot of people including relatives and we are investigating that,” he added.

Kiraithe said police officers who were injured during the attack, including one who was expectant, have been discharged from hospital and are doing well.

“The possibility of you walking into a police station with intent to attack and walk out alive is nil. And all officers should learn from their colleagues in Mombasa and be prepared at all times to deal with such elements,” he added.

He asked the public to be vigilant at all times and report any suspicious activities to security agencies warning that anyone will be considered equally guilty.

“Terrorists aim at mass murder of indiscriminate people, so when you keep quiet, you don’t know whose lives you are putting at risk,” he said.

Kiraithe further called on the youth to resist attempts to be radicalised into causing bloodshed on the promise of paradise.

He advised them to instead exploit the economic opportunities around them to earn a living for themselves.

He said that the fact that terror elements have now resorted to using ‘naïve groups of people in the society’ like youthful women to execute their criminal activities is indicative of the country’s security apparatus alertness to detect criminal activities.

“Of course they had some success in Mpeketoni, but since that time, we have learnt a lot,” Kiraithe said.

He said the government is prepared to deal with any kind of criminal camouflage and other emerging terror tactics using ‘visible and invisible implements’.

“Various security agencies are also coordinating at the border points to intensify security and prevent entry of illegal goods including material that can be used to make explosives,” Kiraithe said.

He said the youth who have so far voluntarily surrendered to security agencies have undergone counseling and been allowed to pursue various ventures to uplift their lives.