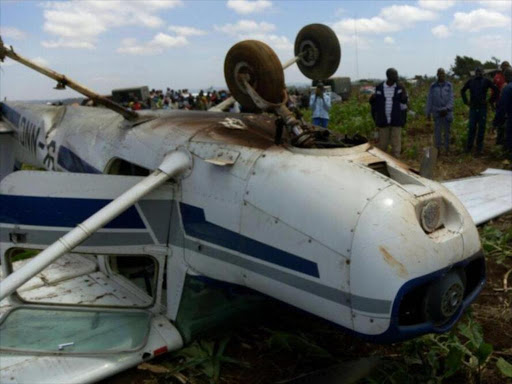 A light aircraft has crashed within Kibiku area, Ngong. /COURTESY

An instructor and a pilot trainee were injured on Monday after a light aircraft crashed within Kibiku area, Ngong, Nairobi county.

The two had taken off from Wilson Airport for training sessions when the plane went down few minutes later, police said.

Police said the two were later picked up to hospital after the plane overturned at a maize field.

A crowd milled around the scene. Police moved to secure the accident spot for investigators to establish the cause of the crash.

This comes days after four officers were injured

They were rushed to GSU hospital in Ruaraka, witnesses told the Star on Thursday last week.

They said the plane near the Kenya School of Monetary Studies along Thika Superhighway.

woman was killed and five others injured when

after take off at the Naivasha airstrip.

Witnesses said the incident occurred at