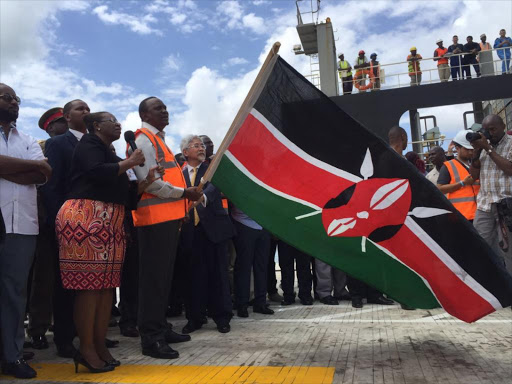 The event marked the first phase of the second container terminal at the post.

Uhuru said ports are poised to play a more integral role in trade facilitation following the discovery of oil and gases in the country and in the region.

June 2017,” he said, adding that his administration is in the process of improving oil-handling capacity in the Port of Mombasa.

completion of the container terminal project marks another milestone for the maritime sector and heralds a new era in the development of ports and their capacity to facilitate the region’s international trade.

truth, the import of this project cannot be gainsaid.

International trade records show that over 90 per cent of the world’s cargo is transported by sea.

Ports are therefore critical to the economic growth of any country,” Uhuru said.

The President noted that the Port of Mombasa plays an important role in the development of the country and it is a lifeline to the regional economies that depend on it for a significant number of their imports and exports.

Uhuru also disclosed that the Kipevu Oil Terminal in Mombasa County will be relocated to a more suitable location to allow for expansion.

He said the multi-billion shilling project will involve the construction of an off-shore jetty near Dongo Kundu.

“Upon completion, the new terminal will have the capacity to berth four ships of up to 100,000 tons at once compared to the current maximum of one vessel of no more than 80,000 tons, at a time,” he said.

He said the project, together with the expansion of the pipeline capacity between Mombasa and Eldoret, will enhance efficiency in the oil sector and reduce costs both locally and in the region.

The President disclosed that his administration is actively engaged in plans to develop small ports along the coastline into commercially viable entities including Shimoni, Malindi and Kiunga.

“Each port of these ports has been earmarked for development either as a fishing port or a commercial port,” he said.

To further ease congestion, the President said the construction of an alternative route from

The corridor, which will cover about 1545 kilometres, will reduce the distance from Mombasa to Bujumbura through the Northern Corridor by 358 kilometres.

The National Assembly has approved Sh27.3 billion from JICA for the construction of a second phase of the second container terminal project set to begin soon.

DP William Ruto commended Uhuru for his commitment to the expansion and modernisation of the port that has scaled up its efficiency.

“The personal commitment of the President has ensured the efficiency that we are witnessing at Mombasa Port,” Ruto said.

National Treasury CS Henry Rotich said the Port of Mombasa is now ranked the fifth best as a result of its improved efficiency.

Mombasa Governor Hassan Joho expressed appreciation for the heavy investments of the national government in the port of Mombasa.