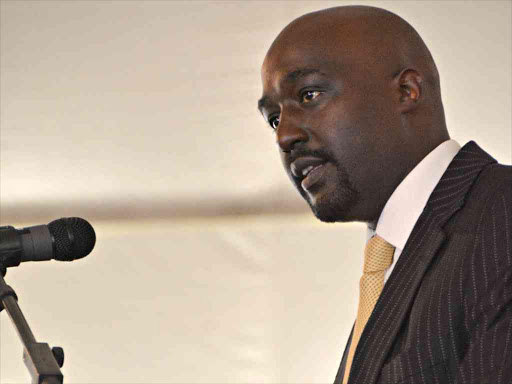 Dr Andrew Mude, while he was announced the winner at ILRI headquarters in Nairobi.

A Kenyan scientist was yesterday awarded a world prize for food research. Dr Andrew Mude (pictured) was announced the winner of the 2016 Norman Borlaug Award for Field Research and Application at the International Livestock Research Institute headquarters, Nairobi. He will receive Sh1 million next month during the World Food Prize international symposium in Iowa, US.

The 39-year-old is a principal economist at ILRI, where he spearheads the Index-Based Livestock Insurance programme.

The researcher was named the fifth recipient of the prize for his work in providing insurance to livestock keepers in arid and drought-prone areas in East Africa. “It should be a matter of great pride for Kenya that two of the first five Borlaug Field Award recipients are Kenyans,” Ambassador Kenneth Quinn, President of the World Food Prize Foundation, said.

In a statement, Agriculture CS Willy Bett said the government is planning to replicate this insurance scheme in northern Kenya, where four million pastoralists depend primarily on livestock.

The programme was launched in 2008 and has benefited more than 16,000 Kenyan households in payout when rains fail.

Dr Charity Mutegi, from Karlo, received the award in 2013. She was awarded for her efforts in fighting the aflatoxin which killed 125 people in Eastern in 2004. Residents ate contaminated maize. Mutegi is the country coordinator for the Aflasafe project for the International Institute of Tropical Agriculture.