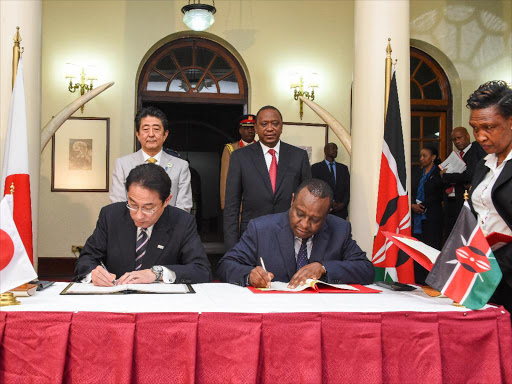 A total of 73 Memorandums of Understanding were signed during the 6th TICAD conference that came to a close on Sunday in an unprecedented move to boost trade between the African continent and Japan.

The package would be spread over three years from this year and include one trillion shillings for infrastructure projects, to be executed through cooperation with the African Development Bank.

Another two trillion shillings would be injected by private investors, and included some of the MOUs signed on

The three trillion is in addition to the 3.2 trillion that Japan pledged to Africa over a five-year period at the last TICAD meeting in 2013.

Japan Prime Minister Shinzo Abe said 67 per cent of the previous funds that his country had pledged to Africa had already been put to use in various projects.

Under the MOU signed

Sunday, the funds will focus on infrastructure, education, health, agriculture, ICT and mining among other sectors.

The funding is in addition to measures taken by Japanese businesses as well as the governments of Japan and African countries and relevant organizations, to promote Japanese business activities in Africa.

The 73 MOU’s involve 22 Japanese companies and universities with the African countries.

Speaking during the event at the Kenyatta International Convention Centre, President Kenyatta stressed on the importance of entrepreneurship as a key driver of economic growth, socio-economic transformation, job creation and social inclusion.

“I am also equally excited at the prospect of witnessing various MOUs emerging from TICAD VI,” said the President.

He urged the business community not to lose any opportunity to explore partnerships that would contribute to the efforts aimed at transforming economic productivity by reaching at least 50% GDP as a share of the manufacturing sector.

“The Government of Kenya is ready and willing to support partnerships that will ensure that our youth not only get quality jobs but our farmers can earn more from their sweat and at least 90% of their agricultural exports are processed locally,” said the President.

The President also lauded the move to launch Japan-Africa Business Forum saying it is a timely platform aimed at transforming the continent’s economies.

“We urge you to use Japan’s valuable experience and technical knowhow to build an African Private Sector that is not only more dynamic but also effectively integrated into the global market,” he added.

The Head of State pointed out that, Kenya continues to make close consultations with other East Africa Community member states to provide a conducive investment climate for foreign investors.

He noted that with the support of Japan, the country has achieved a reduction in energy costs and improved transport, communication as well as power connectivity across the nation.

“We are steadily demonstrating Africa’s green-power generation capacity where it is set to contribute about 5000MW into the national grid,” said President Kenyatta.

The Japan Prime Minister Shinzo Abe said the large number of the captains of industries from Japan who have accompanied him is a sign of commitment by the top companies from his country to grow together with Africa.

He said in order for Africa to continue its quality growth, private sector role is very critical.

To advance efforts geared towards the transformation of business environment, the Japan Prime Minister said, his country and the continent of Africa will launch the “ Japan-Africa Public and Private Economic Forum” as one of the most important outcomes of TICAD V1 conference.

“In order to develop Africa’s investment climate, Japan will promote high-quality investment agreements in Africa more actively than ever before,” said PM Abe.