Jubilee to splash Sh2bn on launch 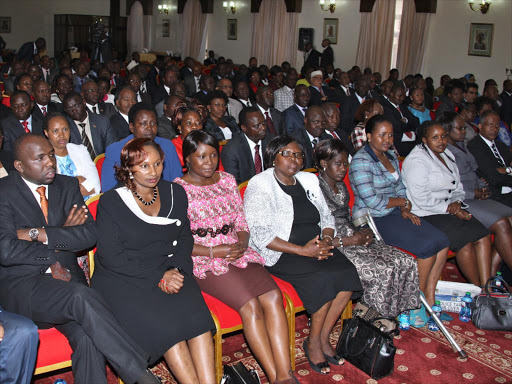 Members of the Jubilee coalition follow proceedings during a meeting chaired by President Uhuru Kenyatta at State House, Nairobi, on June 3. PHOTO / PSCU

It is being billed as the Mother of All Parties that unites the nation. Critics say a monolithic outfit that subsumes 13 parties shrinks the democratic space for pluralism.

From September 7-9, foreign heads of state and 123,000 delegates will be wined and dined and entertained by famous artists.

Each rank-and-file delegate will take home Sh10,000 cash, according to Jubilee sources who discussed the budget with the Star.

“Pomp and color must be accompanied by music and endorsement,” TNA executive Director Joseph Maathai said. He was on the Jubilee Alliance Party steering committee.

“Youths will be involved directly in all party structures and the celebrations will represent counties, special interests, professionals and civil society as well as gender,” TNA Youth League chairman David Gitari said.

Thirteen Jubilee affiliate parties will dissolve at delegates' conferences and merge into the mega Jubilee Party that Uhuru calls his legacy of national unity.

Jubilee Party has only two officials at this time: President Uhuru Kenyatta and Deputy President William Ruto as the party leader and deputy.

Three big events will run concurrently: The relaunch of Team Uhuru, the President's talk at a university yet to be decided and the main Jubilee Party convention.

Delegates of the 13 parties will fill Moi International Sports Centre, Kasarani Stadium and Bomas of Kenya on September 8 for National Delegates Conferences to officially dissolve and join Jubilee Party.

The next day, all delegates converge on Kasarani for the magnificent launch.

The parties have booked all venues in Bomas of Kenya and Kasarani for three days.

tycoons. All aspects of the budget have not been disclosed.

“All the delegates, voting and non-voting, from across the nation will converge for a party that unites the nation," TNA secretary general Onyango Oloo told the Star.

He said he is confident the 2,000 TNA voting delegates will want to dissolve.

“I am not allowed to talk on Jubilee matters. I concentrate on TNA and I'm satisfied it will be a successful historical event," Oloo said.

All delegates are hand-picked.

All delegates from outside Nairobi will be transported to the city.

There is a separate undisclosed budget for refreshments and special branding.

The new party's manifesto will be provided to each delegate. Each booklet will cost Sh1,000 to design and print. Posters and other branding materials will be printed.

Kasarani has the indoor arena, aquatic complex and the Stadium Hotel, which Oloo says has been booked. The 60,000-seat stadium costs Sh120,000. An additional 20,000 guests will sit in the stadium's playing field. Others will follow proceedings on big screens mounted outside and in various halls.

Bloggers hired for the day will operate from Kasarani with a fully equipped media center at the main venue.

Artists contracted to perform are said to have demanded a minimum of Sh5 million to take part in the launch, sources tell the Star.

“Performing at a political rally where you are an artist is a direct endorsement and a gain for the party. However, we have to demand higher amounts to shoulder any shortcomings,” one source said.

Kenya’s top artists earn from Sh250,000 to Sh10 million, depending on the type of performance and how their music ranks on the charts.

“It will be very successful,” Oloo said.

Post a comment
WATCH: The latest videos from the Star
by IMENDE BENJAMIN @Akhasakhulu
News
27 August 2016 - 04:00
Read The E-Paper