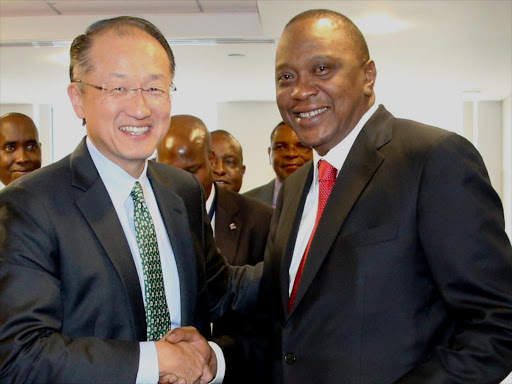 World Bank is seeking innovative ways to support the establishment of economic zones that will create employment in refugee areas.

Jim Yong Kim said the Bank would like to support Kenya

manage the repatriation of refugees in a dignified manner that will turn the Dadaab area into a vibrant economic zone.

He said World Bank is committed to a program that will fast-track support to Kenya on Dadaab, adding that they are putting together a fund that blends International Development Association with grant funding to support refugees in developing countries.

“The program would provide support for the establishment of an economic zone, create jobs in the host community and

Uhuru outlined the rationale for Kenya’s decision to close down the Dadaab refugee camp.

to recruitment into criminal groups like the Al Shabaab,” he said.

He welcomed Uhuru to a summit the will be held on the margins of the United Nations General Assembly in New York next month where discussions on refugees will feature prominently.

“The World Bank is seeking to ensure that the focus of those discussions is not just on the impact of displacement on Europe but also on Kenya and other countries in the developing world,” Kim said.

Uhuru also met Yury Fedetov, the Executive Director of the United Nations Office on Drugs and Crime, and discussed ways of countering drug trafficking based on building regional initiatives.