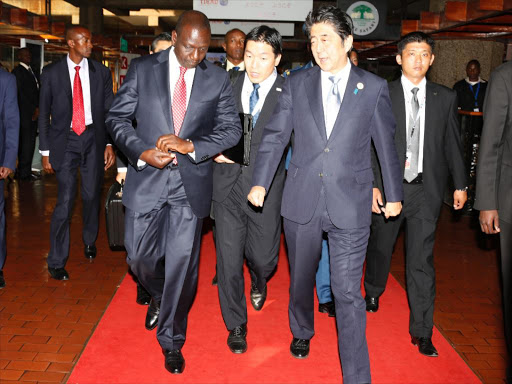 Ruto made the announcement at the TICAD universal health coverage side event in the presence of Japan Prime Minister Shinzo Abe at KICC.

Kenya is a major recipient of global fund support in provision of ARVs and mosquito nets.

In the last 3 years, Kenya has received Sh33 billion to fight HIV, Malaria and TB.

The Aids Healthcare Foundation has expressed their gratitude to the Kenyan Government for the pledge. They were lobbying for the government to pledge

“We had lobbied for Kenya to pledge $4million, which was $2millon higher than previous replenishment. I am dancing because GOK has pledged $1million higher than we advocated for. This for sure is great news and good leadership to other African countries by Kenya,” Faith Ndungu programs manager AHF said.

The Global fund needs $13 billion (approx. Sh1.3 trillion) to be able to cater for the beneficiary countries.

Kenya has been a beneficiary of the Global Fund since 2003.

The money that Kenya has been receiving over the last few years has helped save the lives of thousands of Kenyans.

For instance, close to one million people who are living with HIV in the country are on anti-retroviral treatment funded through the kitty.

A total of 1.6 million are people living with HIV in the country.