Heated debate on bid to send KDF to S Sudan 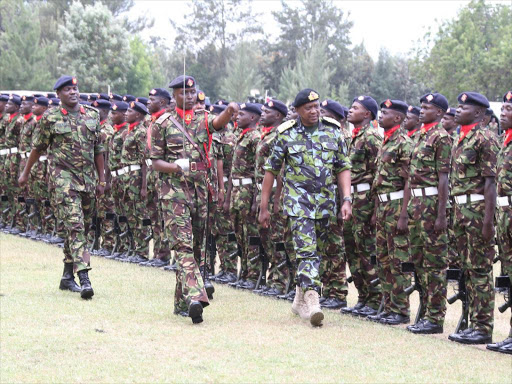 President Uhuru Kenyatta inspects a guard of honour mounted by the Kenya Defence Forces (KDF) during KDF day at the 3KR Lanet. Photo/File

A motion for Parliament to authorise the government to deploy 4,000 KDF soldiers to volatile South Sudan is likely to stir heated debate this week between Jubilee and Cord legislators.

The UN Security Council requested Kenya to deploy the soldiers in its peacekeeping mission in Juba.

Although some Cord legislators say deploying soldiers is timely, they blame the Jubilee administration for “giving a very good reception” to individuals said to be fuelling the violence.

The opposition has also been pressuring the government to withdraw soldiers deployed in 2010 to fight al Shabaab in Somalia. They want them to guard Kenya’s borders instead.

The Jubilee side asked Cord lawmakers to table in Parliament the names of South Sudanese officials living in Nairobi and fuelling violence in their country.

The public should be told how long KDF will spend in the country and its specific mandate, he said. “It is not just about deployment of troops. Various countries need to be using other aspects of responsibility in protecting South Sudan by looking at what or who is fuelling the violence,” Neto said.

The constitution provides the National Assembly should be involved in any government decision to deploy KDF Forces for regional or international peace support operations.

Neto warned the government against “being quick” to deploy soldiers. He said Kenya should compel IGAD to impose sanctions on South Sudanese officials perpetrating the war.

Duale, however, told the Star, “It is now crystal clear that as the neighbour and as a member of IGAD, the government of Kenya must stand with the UN and any other institution to safeguard the lives of the people of South Sudan. We are doing it from the moral high ground.”