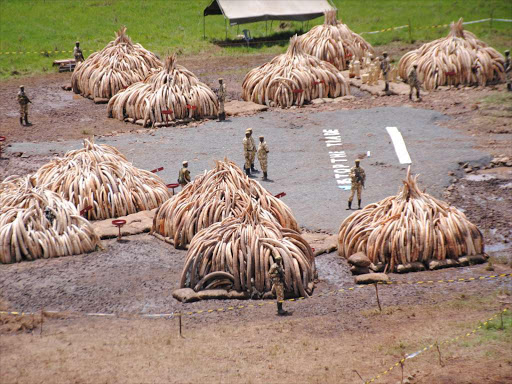 An aerial view of the piles of Ivory that was set ablaze in April by President Uhuru Kenyatta. photo/file

Countries opposed to Kenya's bid to have the global trade of ivory banned are spoiling for a fight ahead of the United Nation's meeting next month in South Africa.

The 17th meeting of the Conference of the Parties to the Convention on International Trade in Endangered Species of Wild Fauna and Flora will be held in South Africa between September 24 to October5.

However,the meeting set to seal the fate of African elephants among others wildlife and plants has degenerated into a heated debate,with some African countries

Namibia and Zimbabwe have already petitioned CITES to exempt their elephants from the ivory trade ban,on grounds that their populations are thriving.

The two argue that proceeds from legal stocks of ivory would generate income to improve conservation and anti-poaching efforts.

Unconvinced by some of the premises,environment CS Judi Wakhungu last week convened

a two-day retreat in Naivasha for the National Convention on International Trade in Endangered Species of Wild Fauna and Flora Technical committee to review and develop a country's position on all items set for discussion.

Experts from the Ministry of Environment and Natural Resources, KWS, National Museums of Kenya, KFS, KFRI, Office of the DPP, the Ministry of Foreign Affairs State Department of Fisheries and Blue Economy and representatives of Conservation Alliance of Kenya, an umbrella body bringing together more than 50 NGOs forms the committee.

The meeting follows completion of Kenya’s consultative preparation process through a national multi-agency CITES Technical committee and subsequent submission of proposals for consideration at the conference April 27.

In total, Kenya has submitted14 proposals covering a wide range of wild species, including the African elephant, African Pangolins, species of snakes endemic to Kenya, the thresher Sharks, species of chameleons, plant species and others on measures to combat illegal wildlife trafficking.

Over 180 proposals are lined up for discussion as agenda items of the Conference of the Parties that will bring together 182 States that are Parties to the Convention.

Parties to the convention will take critical decisions on wildlife trade policy and the scope of regulatory control over international trade in specific wild species.

The European Union has also joined efforts being fronted by those dampening Kenya's bid after it released a document on July 1 opposing proposals to protect elephants,causing a major spat with NGOs.

EU is the biggest voting bloc in CITES with 28 members.

A surging security costs for wildlife against poachers has been an area of concern with countries keen to sell ivory saying the gap can be sealed by selling stockpiles.

Kenya burned 105 tonnes of ivory and 1.35 tones of rhino horns in April this year,a position not supported by countries such as South Africa.

According to the Kenya Wildlife Service, elephant population in early 1970s was about 167,000, but in five decades, it has plummeted to slightly more than 35,000.

Kenya Wildlife Service corporate communications manager Paul Udoto said Kenya remains committed to playing its rightful role in ensuring that international trade in endangered species of wild animals and plants does not threaten their survival in the wild.

"That is why it is lobbying and persuading Parties to the CITES Convention to ensure discussions of the proposals before the CoP17 bear this intention in mind,"he said.

Kenya wants all African elephants listed in CITES Appendix I, domestic ivory markets closed and an enhanced management of ivory stockpiles including where possible, their destruction.

Kenya also seeks discussions on the decision-making mechanism for legalising future trade in ivory and prohibiting the export of live African elephants to zoos ended.

Twenty thousand African elephants were killed by poachers in 2014, with Tanzania and Mozambique losing over half of their elephant populations between 2009 and 2015.

CITES figures show a 61 percent drop in African elephant population from 1980 to 2013.

Post a comment
WATCH: The latest videos from the Star
by GILBERT KOECH @KoechJunior_1
News
22 August 2016 - 05:00
Read The E-Paper