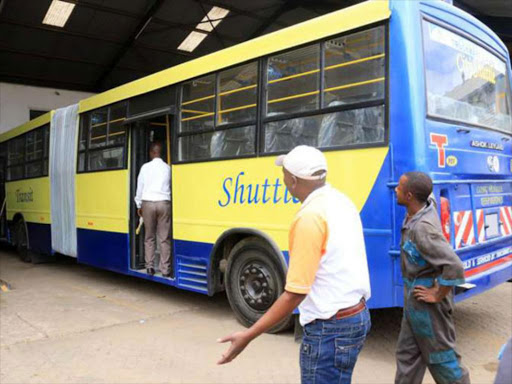 said the county government was in talks with relevant stakeholders on how to start the programme.

"We shall start with Thika and Ngong road before we embark on Jogoo road all the way from Mama Lucy Hospital, and Kangundo road," he said.

"We are building nine transport systems to accommodate the buses. We are carrying out a pilot operation to see how effective the system will be,."

He spoke at Friends Church Maringo whose annual general conference he attended on Saturday.

Other routes include Limuru to Nairobi, Langata road, Nairobi to Machakos, Kinoo overpass and Nairobi to Ruiru.

Kidero said; "All we want is to de-congest traffic on the main roads. We cannot keep all the vehicles on the road just because everybody owns a car."

Last week, City Shuttle bus services ran a test drive of one of the mass transit buses on Mombasa Road, through the city centre and to the Kencom bus terminus.

The bus boosted hope for thousands of commuters as the plan to introduce the mass rapid transportation system would translate to less or no traffic jams in the capital.

It will carry 62 sitting and 70 standing passenger on every trip.