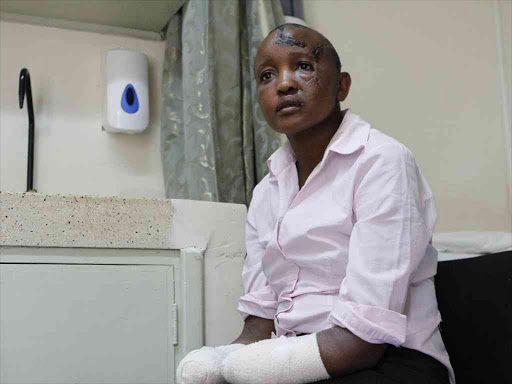 Jackline Mwende at PCEA Kkikuyu Hospital where she is being treated following a panga attack believed to have been by her husband Stephen Ngila. /MONICAH MWANGI

While attention is riveted on the Machakos woman whose husband allegedly hacked off her hands, two other narratives have emerged. A meeting with the man's sister on the day of the attack and a business deal gone bad.

has been offered help including money for a year and

Her husband Stephen Ngila, 34, has been charged with attempting to murder her on

He denied the charges and is in remand for his own safety, and that of witnesses, the judge ruled. The case will be mentioned on

August 23 while the hearing will begin on September 20.

that he was with her on the fateful day at her rural home in Utithini village when news broke about the gruesome attack.

“All I can say is we were with Ngila in my house planning a function for our elder brother when he was called and told that his wife had been attacked," said

Mwende accuses her husband, who lives in Masii, of attacking her with a panga because the couple was childless during their seven-year marriage. She suffered serious head injuries and is deaf in one ear.

But Nthenge said the family was surprised that Ngila was arrested when he visited his estranged wife at Machakos Level 5 Hospital the following day.

Asked why she did not reveal this earlier, Nthenge said, “Because Mwende said Ngila attacked her, we decided not to say much but leave the matter to God.” She referred to the Bible story of Joseph.

Nthenge also said doctors told the couple Mwende was fertile but Ngila had a treatable fertility issue. She expressed surprise that Ngila would attack her over fertility.

that Mwende had been attacked before.

“Before the attack (on

July 23), Mwende did not open her shop in Ilinge market for three consecutive days. We were told that for those three days she had gone into hiding in Wetaa market," he said.

“There was another time a gang woke her up and hurled stones at her house after she refused to open the door."

Muthama said the couple had been living apart but said their relations appeared to be on the mend.

“According to our clan, I refer to Mwende as my mother but even with that, I am not convinced her husband Ngila was the one who attacked her," he said.

“She had other male friends who came visiting and whom we believe helped her stock her shop. We suspect one might have felt shortchanged and planned revenge," he said.

lot of people are peddling all sorts of lies but the truth of the matter is that it is Ngila who attacked his wife and left thinking that he had killed her,” said Mwala DCIO Joseph Muguna.

Muguna said Ngila and Mwende had marital problems but were still a couple as they were not separated as alleged.

He said fingerprints were retrieved from the scene but that his officers were yet to find the panga the woman's attacker used.

while the Machakos government offered Sh30,000 monthly stipend for a year, a one-off Sh100,000 donation and a house help.

while Ngila is being held ahead of the start of the hearing on September 20.

He denied the attempted murder charge and will remain in custody until the case is heard and determined.