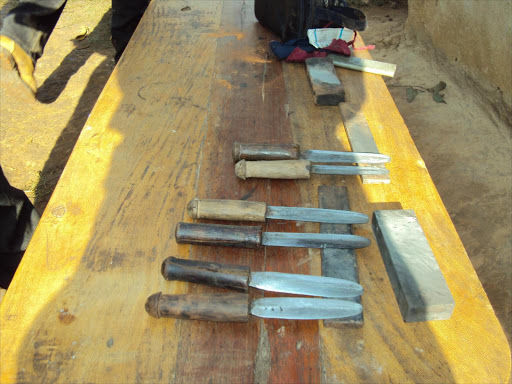 A 15-year-old boy was admitted to Webuye county hospital on Wednesday morning after his penis was nearly chopped off by a 'quack' circumciser.

The class five pupil was rushed to the hospital by relatives after the circumciser's knife slit almost all of his manhood.

The parents said the boy was not cut by a traditional circumciser but by a doctor who had been called to perform the operation.

The doctor, who has since gone into hiding, is said to have previously circumcised two other boys in the same homestead successfully.

Webuye hospital medical superintendent Patrick Muturo said the minor is responding well to treatment although the damage done was extensive.

Muturo said the quack had lied to the family that he was an experienced medic who knew how to carry out a circumcision.

He asked parents to take their children to hospitals and health centres instead of trusting "people who have never been to medical class".

"[Such people] come with cheaper prices ... carrying with them scissors and items that are not sterilized and yet you don't even know how many people he has cut with the scissors,’’ he said.

He asked police to crack whip and arrest all those people who are tainting the image of doctors by transversing in village’s circumcising boys.

A source from the hospital that sought anonymity said that close to 14 boys have been treated at the facility in similar circumstances.

This comes even as Bungoma county director of culture Augustine Mayabi warned circumciser against forcing their way to cut children without parent’s approval.

This right of passage, which takes place in the month of August, will see hundreds of boys from the Tachoni and Bukusu communities in Transzoia, Bungoma, Kakamega and parts of Busia face the cut.