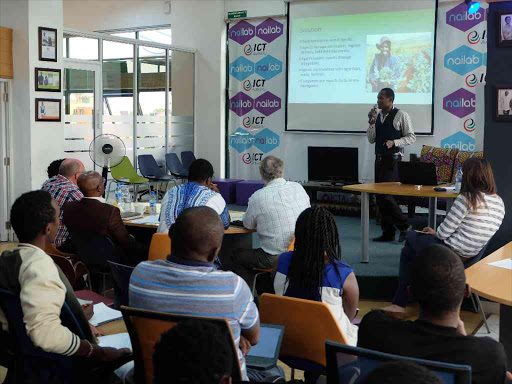 Edwin Amakobe, a computer science graduate from Egerton University explains to participants of the Hack4Farming Nairobi challenge about the Mbegubora online application that will connect seed companies with farmers through agents.

Seed companies will now get feedback from farmers on the performance of seeds through an online application known as Mbegubora.

Edwin Amakobe, a computer science graduate from Egerton University who developed the software said extension officers or agents can subscribe to send information on behalf of farmers.

“The agents or extension officers will be required to send information after engaging farmers either through demonstration sites and participating in field days. Seed companies have been selling their seeds to farmers through their agents, an expensive affair. But the Mbegubora platform will link agents, seed companies directly to farmers,” said Amakobe.

was the winner of the Sh200,000 grand prize in the recently concluded Hack4Farming Nairobi challenge that took place at the Ihub centre in Nairobi.

He said seed companies will need to register their agents who will be charged Sh200 per month.

“Farmers will also benefit by using an Unstructured Supplementary Data (USSD) services that is easily accessible to farmers who do not need internet connectivity where one dials a code and selects services they want to know such as a field day, location of a demo plot or even talk to an expert,” he said.

Amakobe said the application will promote accountability for seed companies because they will be able to distribute seeds and know about how they are performing in the field.

“The Ag Data application will assemble data on weather, agronomy and soil from farmers based on their geo location. We want to be able to provide accurate and real-time information to farmers regardless of the phone the farmer is using,” said Mbeya.

The competition sought to address challenges faced by East African seed companies with participants tasked with developing new ideas and coming up with products and services that will benefit the local agriculture sector, as well as put underutilized agricultural data to use.

Dr Kayode Sanni the African Agricultural Technology Foundation, rice project manager who was one of the judges said technological innovation is a way of encouraging young people into agriculture without making them feel out of touch with their generation.

“Young graduates cannot use cutler’s and hoes like our forefathers and innovation that will make them feel fulfilled is what will encourage them to venture into agriculture. The government should thus boost it at the national, county and local levels,” Sanni said.

Hanna Camp from a-Where organisation who were the organisers of the competition said they will be holding a boot camp next month to mentor the young innovators in continuous use of their applications.