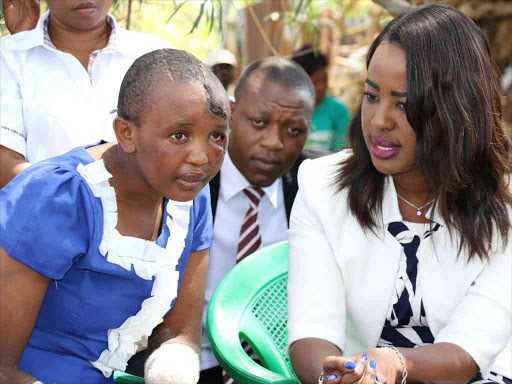 Machakos Governor Alfred Mutua's wife Lilian Ng'ang'a with Jackline Mwende, 27, who was battered by her husband, during a visit at her parents' home in Kathama village, August 3, 2016. /ERIC KAMANGA

Sh30,000 monthly, for a year, from the Machakos government.

Ng'ang'a said Mwende will also be provided with a house keeper whose services will be paid for by the county for a year.

"We are touched by her situation and condemn this beastly act," she said on Wednesday when she visited the woman at her parent's home in Kathama village.

Ng'ang'a further said Mwende will get prosthetics and any other medical requirement she will need.

"There will be an ambulance at her disposal to take her to the clinic or hospital for check-ups for one year," she said. "We will also train her so that she is employable and able to sustain herself."

She said the Machakos government offer the support for more than a year based on a review of the woman's condition.

Passaris urged women who have suffered domestic violence to speak out and allow the government to take action.

"If you do not speak out, you become a statistic," she said.

Mong'are asked Director of Public Prosecutions Keriako Tobiko to oppose the bail terms of attacker Stephen Ngila who was arrested on Monday.

"The case should take between three to six months. Violence of whatever kind should stop," she said.

"Women in violent relationships should take up their rights. Pastors should not tell people to keep silent."

Marji said the company will take Mwende for treatment on Thursday and pay all the expenses.

"LG has committed to covering the woman's

He added that the company will pay for her transport to and from hospital and cater to counseling and artificial limbs.

Attacked for not falling pregnant

Ngila cut off his wife's hands and hacked her head with a machete after a dispute about the fact that she had not fallen pregnant in seven years of marriage.

Mwende said she was surprised by the attack, as doctors told the couple she was fertile while Ngila was impotent.

Sources close to her family said the two had not lived together for a year. She was living at their home while her husband had rented a bedsitter in Masii town.

The man is said to have wanted Mwende to leave the house and return to her parents' home for failing to bear him a child but that she decided to stay to save their marriage.

on Tuesday that Ngila

deter other perpetrators of widespread domestic violence in

Ngila was charged with attempted murder

after he attacked his wife almost two weeks ago.

Nairobi-based Federation of Women Lawyers said he should be immediately investigated and prosecuted.

Domestic violence is widely accepted but victims rarely seek justice due to social pressure and little faith in the judicial system, according to Nairobi's Gender Violence Recovery Centre.

passed a domestic violence law which had been pending since 2002. It criminalised a range of offences from verbal abuse and intimidation to assault and rape.

The legislation also ensured that victims receive counselling and other forms of support.

Post a comment
WATCH: The latest videos from the Star
by RHODA ODHIAMBO AND NANCY AGUTU @thestarkenya
News
03 August 2016 - 15:00
Read The E-Paper