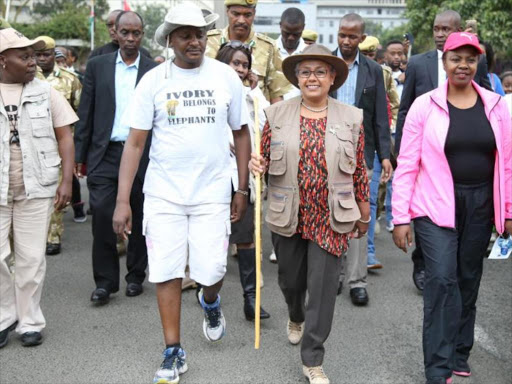 The walk seeks to

raise awareness on the value of elephants and rhinos.

Speaking before flagging off the walk at the Kenyatta International Convention Centre (KICC), the First Lady applauded the increasing support for activities geared towards protecting elephants.

She said it is encouraging that ordinary individuals were now spearheading wildlife conservation efforts.

The First Lady observed that engaging communities at the grassroots to foster a harmonious co-existence between people and the ecosystems was one of the best ways to mitigate human-wildlife conflicts.

.The First Lady expressed optimism that through individual and collective efforts, elephant poaching will be eradicated.

She commended Jim Nyamu, the Executive Director of Elephant Neighbours Centre, who is leading the new initiative to protect elephants and rhinos.

“Just one year ago, Jim began walking to save elephants and I understand that since then you have walked over 5,000 kilometres; which is simply astounding,” she said.

The First Lady expressed hope that through efforts such as Nyamu’s, the entire East African Community will be pulled towards addressing the issue of elephant poaching and ivory trade.

Nyamu challenged Kenyans to come out in large numbers to support the initiative.

conservation showcases what Kenyans need to do to combat the poaching menace.

Nyamu and his team will take 135 days to cover approximately 3,247 KM across the three East African countries of Kenya, Tanzania and Uganda.

The walk started off at the KICC in

Nairobi and is headed to Dar es Salaam, Tanzania.

The walk will go through

Moshi, Morogoro and Bukoba in Tanzania before heading to Uganda.

In Uganda, it will pass through

Queen Elizabeth National Park in Jinja before heading back to Nairobi via Busia, Kakamega and Nakuru.