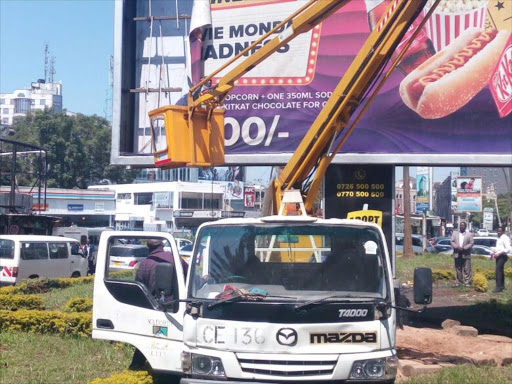 On Thursday, council authorities seeking to recover the monies owed by the firms brought down billboards in Westlands.

"We only take five per cent per ad, a very small amount compared to what their agents pay them," he said.

Daima's 'Aqua Clear Drink' advert in Westlands' curio market was one of the ads brought down.

Esther Passaris' Adopt A Light, which was advertising for Planet Media Cinema, was also affected.

Its billboard next to the Sarit Centre was destroyed by the officers after accruing over Sh37.4 million in two years.

Ntoti said the county will employ all means, including legal action against the defaulters, to recover the debt.

“We cannot tolerate this anymore. We are required to provide services to wananchi but how can we do this if we are owed such amount,” the chairman said.

Other outdoor advertising firms that owe City Hall are Ads Site Ltd, which owes Sh1.7 million; Magnate Venture Ltd that is yet to clear Sh19 million; and Ingeneous Concept, which has not settled its Sh3.6 million debt.

City Hall has intensified the 'operation clampdown' to recover millions of shillings owed by businesspeople, property owners and tenants.

Last week, the and took away their belongings in its bid to recover Sh60 million rent arrears. Rate defaulters have also been affected.