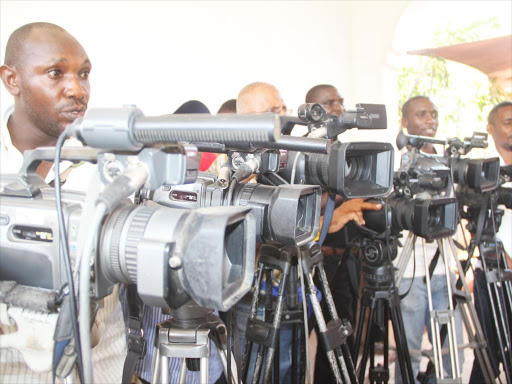 A file photo of the media at work.

The High Court on Friday declared as constitutional laws that silence critical reporting and imposes hefty fines on journalists and media firms.

The ruling means journalists will now be fined up to Sh500,000 and media companies up to Sh20 million if a new government-regulated board finds them in breach of a government-dictated code of conduct.

This will make journalists and media houses shy away from critical reporting and might kill investigative journalism for fear of hefty fines.

“It must be acknowledged that journalists and the media enterprises they work for, not to put too fine a point on it, are not angels. They will do things that they ought not to do either deliberately, inadvertently or negligently,” the judges said.

“They [journalists] must be prepared to face the consequences, which are in accord with the law. In our view the provisions of 38(1)(f) of the Media Council Act and Sections 102 E (1)(f) and (h) of the Kenya Information Act are not in violation of the constitution.”

The judges found at least two sections of the laws unconstitutional.

They said Section 3(2) of the Media Council Act is unconstitutional to the extent that it requires that those to sit in the tribunal probing complaints against journalists must reflect interests of all sections of society.

The judges said this provision limits the right to freedom of expression.

Also declared unconstitutional is Section 6(2)(c ) of the Media Council Act for being vague in its description of what constitutes matters of national security.

Their judgment arose out of a case filed by three media houses, the Media Council of Kenya, the Kenya Editor’s Guild, the Kenya Union of Journalists and the Kenya Correspondents Association.

The media players had said the laws are unconstitutional because they seek to control, interfere with and penalise journalists.

They said the new laws, combined with other available processes for challenging publications by journalists such as the penal code and Defamation Act, will have a chilling effect on reporters and media houses.

The journalists may, in public interest, want to criticise either state conduct or matters touching on religion, family and education, the media houses said.