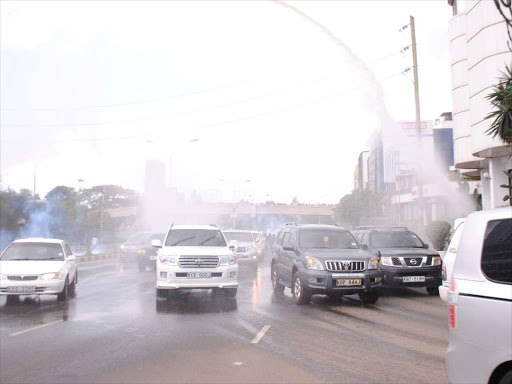 Anti-riot police officers use water canon to spray at Cord protesters who tried to storm at IEBC offices. photo/PATRICK VIDIJA

Cord’s weekly protests are illegal and police have been ordered to arrest those taking part in the demonstrations, the government has maintained.

“We will arrest anyone who will come out to protest without fear because we have a responsibility to keep this country safe,” PS Karanja Kibicho said.

“Because we have a responsibility to protect everyone, we are going to take that responsibility very seriously not to allow further injuries to Kenyans, injuries to police officers and further damage to businesses. We have seen a lot of this during the few weeks of demonstrations,” he said.

“This is the fourth week and we have seen that the level of intolerance on the part of the demonstrators is growing by the week and it is clear to those who care to observe that if this is allowed to continue we are not going to see those levels come down,” the PS said.

“I don’t think there is a peace-minded

The PS said the constitution allows peaceful demonstration only.

“I think sometimes we ask for too much. In a riot situation, we have no opportunity of analysis. Our work as a ministry and particularly police is to maintain law and order,” he said.

The PS, however, pointed those security officers who will be found to have used excessive force will be punished. Three people were killed during Monday protests and others injured.

“Any police officer, who will truly be found to have acted outside the law, not by public opinion, is going to be punished,” Kibicho said.

“But we are not going to be pushed to judge because of public pressure without proper process without giving police officers a chance to say their story.”

Kibicho spoke at Wilson Airport where he received 10 police officers injured in Siaya and Kisumu counties during the Cord’s protests on Monday.

He was accompanied by IG Joseph Boinet and Deputy IG Samuel Arachi.

The wounded officers were airlifted for specialized treatment at the Nairobi West Hospital. Kibicho said 29 officers were injured during the protests and 19 have been treated and discharged from hospitals.