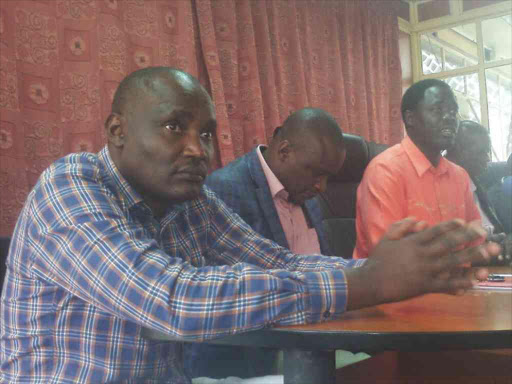 shooting of three protesters in Nyanza.

John Mbadi said they will seek alternative methods to protect themselves if the killings by police continue.

"What we saw on Monday happening in Homa Bay, Kisumu, Siaya, and Migori mostly targeting the four counties inhabited by the members of the Luo community and even by extension Kibera slums, is a repeat of what we saw in 1969, for those who were there and for those who were not there, what we have read about the ethnic cleansing that happened in Kisumu in 1969 under the leadership of the late Mzee Jomo Kenyatta," ODM chairman John Mbadi said.

Mbadi was making a reference to an incident in 1969 where 11 people were killed and hundreds injured when polic indiscriminately opened fire on a crowd.

hospital, a function presided over by former president Jomo Kenyatta.

The event has since been dubbed the Kisumu massacre.

"It is not exciting that we are seeing a repeat of the same under another Kenyatta government, but this time the government of Uhuru Kenyatta," Mbadi said.

The lawmaker further questioned justification given by the police over the use of live ammunition against protesters terming it a constitutional breach of their rights.

"How would an unarmed woman really pose a danger to an armed police officer with a gun?"

"How is an unarmed woman who was shot in

Shauri Yako in Homa Bay, pose a threat to a police officer with a gun?"

Mbadi said at a press conference on Wednesday where he further said the "profiling, targeting and killing of Luos by police" will not be tolerated.

He said Uhuru's administration should take action against the culpable officers if the president is not responsible for the killings.

said the police were heavily deployed to areas inhabited by members of the Luo community including Kibera, Kisumu, Migori, Homa Bay and Siaya alleging that the officers were given a 'shot to kill order'.

On Tuesday, Kisumu Senator Anyang' Nyong'o said he was ashamed of the attitude of law enforcement agencies in Kisumu during the Monday demos.

Nyong’o said police action revealed ethnic profiling of the Luo nation which has taken root in the ruling Jubilee Administration.

"This must stop! No amount of intimidation will stop Cord and the people of Kenya from taking the current IEBC home and putting in place a sound constitutional framework for democratic elections in Kenya," he said.

The calls were reiterated by Ugunja MP Opiyo Wandayi, who in a separate statement, said what happened in Nyanza was tantamount to a declaration of war against the Luo community.

"The time for demonstrating true leadership, as a people, is now and not tomorrow. The culpable police officers and their commanders must be held to account, individually," the ODM political affairs secretary said.

The opposition MPs said that the police are only covering up for their actions by to Nairobi for specialised treatment.

They said the move was only to justify the use of live bullets against protesters.

Awendo MP Jared Kopiyo said: "We are not in Kenya by invitation. We are here by right. If we are not welcome in Kenya let someone stand up and tell us."

The MPs have vowed to move to court to sue the state over the killings.

"Why are they given a shoot to kill order on Nyanza demonstrators, we want all the police bosses in the four Luo counties to be recalled," Kaluma said.

"Kenyatta should be told that the boundaries of this country do not start in central and end somewhere in Nandi," Kaluma said.

"If Uhuru has failed to lead the country let him pave way for Raila to lead Kenyans," Ugenya MP said.

On Monday three people were shot dead; one in Kisumu and two in Siaya during the protests organised by Cord to push IEBC commissioners out of office.

Four others were admitted at Kisumu East District hospital with gunshot wounds while scores were injured after anti-riot police engaged the protesters.

Two were shot on the head and one on the right foot at Kenyatta Avenue near the Kisumu county headquarters.

Cartridges collected by journalists, two MPs and some protesters showed that the officers used .