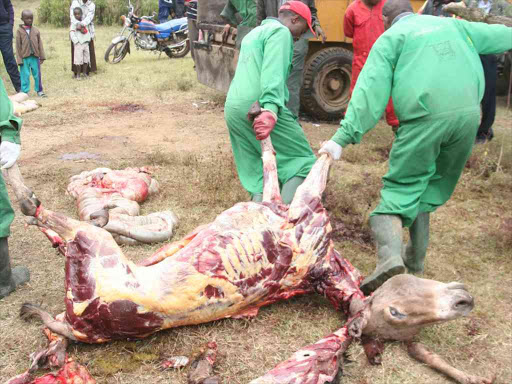 Workers from the Naivasha Municipal Council dispose seven donkeys which were found slaughtered in Naivasha along the Nairobi-Nakuru highway. Photo George Murage

Illegal game meat which is unfit for human consumption is finding its way to Nairobi from Naivasha, Kenya Wildlife Service has said.

This came as a suspect was nabbed in Naivasha with over 200kgs of zebra meat stashed in gunny bags while en transit to Nairobi.

According to the officer in charge of Hellsgate National Park Hapicha Ellema, the suspect was arrested in Manera village while packing the meat.

Hapicha said those involved in the illegal trade were targeting ready markets in Nairobi, Gilgil and Nakuru.

“Cases of wild-meat trade around Naivasha are on the increase mainly around the highway and farms inhabited by squatters,” she said.

Speaking after the arrest, the senior warden attributed the rise in the cases to the high number of wild animals outside protected areas.

She said over 70 percent of wild animals around Naivasha and Gilgil were living away from protected areas.

“As a result those involved in the illegal trade have easy access to the wild animals leading to a sharp rise in wild-meat trade,” she said.

Hapicha was however quick to note that KWS officers were up to the task adding that they had managed to make several arrests and recover snares.

“The poachers are laying their snares during day time and operating at night before ferrying the meat to various destinations,” she said.

On the issue of human-wildlife conflict, the senior officer noted that the cases were also on the rise mainly around farm surrounding the two national parks in the area.

She identified the most affected areas as Ndabibi, Gatamaiyu, Longonot, Gilgil and parts of Moi Ndabi where the number of straying wild animals was very high.

“The most notorious animals that have seen cases of human-wildlife conflict rise are buffaloes and leopards which are killing livestock,” she said.

Hapicha called on members of the public to liaise with KWS officers whenever wild animals strayed to their farms or homes.

“We have set up a hotline number and we are working with other stakeholders to address the cases of wild-meat trade and human-wildlife conflict,” she said.