I withdrew petition to stop ‘meddling’ 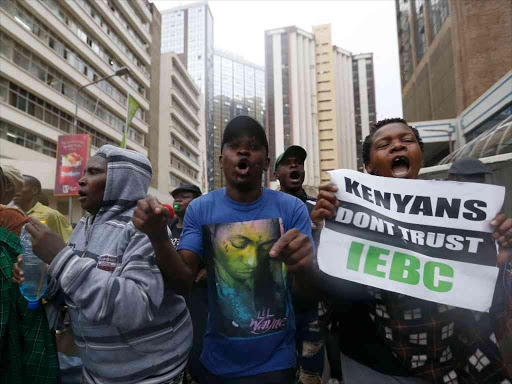 Cord supporters protest outside Anniversary Towers in Nairobi on April 25. The opposition wants the IEBC commissioners to resign /JACK OWUOR

Midiwo yesterday said Cord realised the Jubilee government would instruct the courts to drag the petition. “Once the case is in court, we cannot push them out through negotiations or demonstrations since they will start claiming we denied them justice,” he said.

Midiwo said he has not abandoned the petition and will present it “at the right time”. “The commissioners are prolonging their stay at the IEBC through unnecessary arguments, but I can assure you they will go home before the next election,” he said.

Midiwo said no one supports the electoral commission. “The Auditor General, politicians and civil society groups have turned away from the commissioners because of their incompetence,” he said. The MP said he put a lot of time into drafting the petition against the Independent Electoral and Boundaries Commission.

“I cannot tell you how much time it took me to prepare the petition, but I can assure you we have a strong case against the IEBC. We will win and send these people home,” Midiwo said. Cord wants the IEBC commissioners to resign.