The rise of Boniface Manono to 'celebrity' status 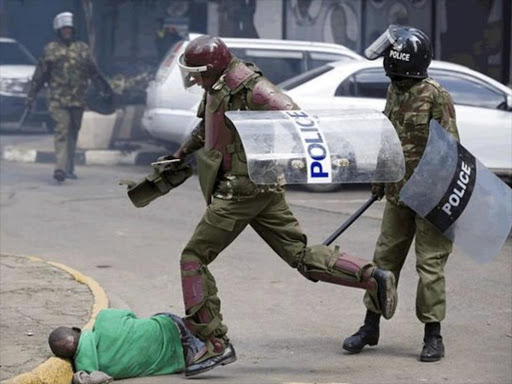 Boniface Manono, a resident of KIbra being assaulted by police officers during the anti-IEBC demonstrations in Nairobi on Monday.Photo/File

Before the anti-IEBC demonstrations on Monday, few people knew the existence of Boniface Manono.

But cameras captured a man being and later made rounds on social media, some saying he died as a result of the beating.

On Tuesday, Kenyans mourned the man, then known as Benard Ngatia

Cord leader Raila Odinga paid him a short tribute before a press briefing on Tuesday by calling for a minute of silence to be observed for the 'death' of the now new "celebrity" in town.

shoe to prove their point.

The video clip caused an uproar with

politicians, diplomats and NGOs condemning the brutality meted on protesters by the police.

Manono was traced to Kibera and later taken to Coptic hospital where he was treated after the assault.

He spoke out for the first time explaining how he was caught up in the drama.

Within a short time, Manono had become an instant celebrity

and was hosted by a popular morning radio show with pictures of him taking selfies with admirers flooding the social platforms.

The little known man from Kisii had become

a Kenyan celebrity, sharing and resharing his near death experience with gusto.

Manono said that he had come from Uber offices in Westlands to activate his account as a taxi driver when he came across the demonstrators on University Way.

"I was walking towards the city centre when a tear gas canister exploded on my feet and I ran towards Uhuru Highway. I saw people running in one direction and I followed them, also trying to get out of the way of the police," he narrated.

He said it was as he was running that the officers went after him, was tripped and fell unconscious.

"When I woke up, some people were helping me to stand, I was helped by some people who I figured out were journalists. I later walked to Uhuru Park where I was picked by my uncle who took me to his Kibera home in the evening," he said.

In another version, Manono claims he was taken home by a friend.

Manono said that while he was being beaten, he did not feel any pain but only started having pangs while in Kibera.

He said a good Samaritan took him to Coptic hospital where the media later traced him.

At the hospital, the doctors conducted X-rays on his back and examined him for internal injuries.

He would later be discharged after being given painkillers.

"After watching the clip, I saw that the beating was really tough and I am thankful I came out of it alive," said Manono.

Manono also denied being involved in the demonstrations.

He denied putting a stone in his pocket as seen in some of the photos from the scene.

A man clad in the same clothes was spotted in many pictures participating in the protest.

Post a comment
WATCH: The latest videos from the Star
by WILLIAM MWANGI @memwarwilliams
News
19 May 2016 - 03:00
Read The E-Paper