Dadaab refugee camp will be closed by May 2017 - Kibicho 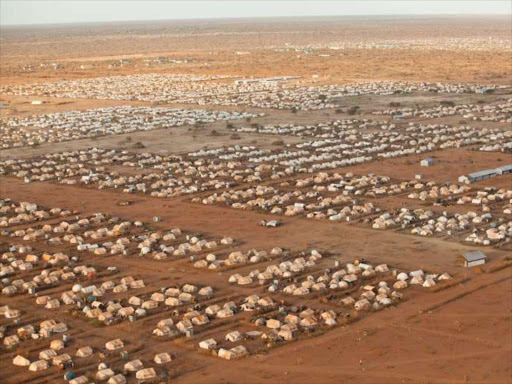 An aerial shot of Dadaab, the world's biggest refuge camp.

All refugees in the Dadaab camp will be repatriated to Somalia by May next year, the government has said, despite calls against the move.

the first batch of the refugees will have been moved by November.

The government announced on Friday it had the department of refugee affairs, the first step in closing Dadaab and Kakuma camps in Garissa and Turkana counties respectively.

editors at a Nairobi hotel on Wednesday Kakuma camp will not be affected, as it "does not pose any threat".

He said it is only Dadaab camp that has remained a

"source of headache" for Kenya; the camp has a terror cell and "thriving illicit trade".

"We are assuring the world that there will be no Dadaab refugees by May. This is an undertaking we are making as a government," he said.

He said the government has put in place plans to make sure those targeted do not "escape" from the camps to neighbouring counties.

Global humanitarian and human rights agencies lashed out at Kenya for going against its international obligations in protecting the rights of refugees and displaced persons.

the announcement will have far-reaching implications on thousands of refugees and asylum seekers who have called Kenya a place of refuge.

But Kibicho maintained that Kenya will not turn back on the move as $10 million (Sh1 billion) has been set aside for the exercise.

said the international community has "abdicated" its responsibility in providing funds for the refugees.

"At least $100 million (Sh10 Billion) was pledged for refugees in the last few years. Kenya has only gotten Sh1 billion of this," he said.

But he noted that

the government is not taking the move to solicit funds from the international community.

"Not at all. Even if they gave us one billion dollars per refugee... We do not want it," he said. "We want these people to go back. Our national interest is superior to our international obligations."

Kibicho accused NGOs of being

behind the slow pace of refugee returns to Somalia; he said they have hampered efforts to effect the Tripartite Agreement signed in November 2013.

The agreement by the

UN refugee agency, Kenya and Somalia provides a road-map in which the refugees can go home in a humane, safe and voluntary process.

At least 14,000 refugees have since returned.