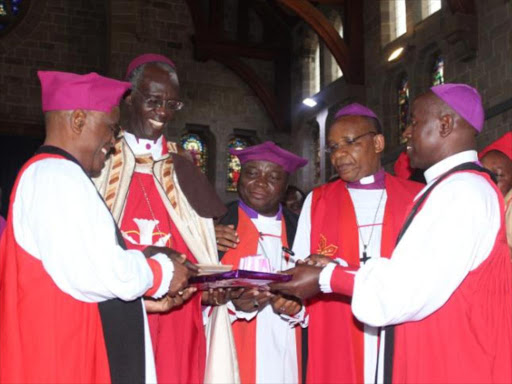 Archbishop of the Anglican Church of Kenya Eliud Wabukala was feted on Sunday ahead of his retirement next month.

The service held at All Saints Cathedral in Nairobi was graced by a number of notable public figures including Nairobi governor Evans Kidero and Equity bank chief executive James Mwangi.

Wabukala was elected the fifth Primate of the Anglican Church in April 2009 to succeed the then Archbishop Rt Rev Benjamin Nzimbi.

He will officially leave office on June 26; the church has nominated six bishops to fight it out for his position.

“I want to thank all the Anglicans in the whole country for standing with me for the seven years I have been in this position. Women, men, children, bishops and all the church leaders you were dear to me,” Wabukala said.

Wabukala, also the Chairman of of National Anti-Corruption Campaign Steering Committee, prayed for the country and the leaders in his last mass as an Archbishop.

The ever-jovial, humble man urged everyone to be just and obey the word of God.

“I am praying for this country, the leaders and politician, some of whom I have worked with and I will continue working with, that they steer this county with wisdom. I pray for peaceful elections next year,” he said.

Speaking during the service,

Most Rev Stanley Ntagali, the Archbishop of the Church of Uganda, mentioned that Wabukala’s reign has been successful and called for a smooth transition adding that “leadership comes from God.”

The father of five was heaped with praises even from his family who termed him a family man.

The retiring Archbishop urged other church ministers to love the people they serve as that will be the only way they will be in a position to serve them devotedly.

He also said that all church ministers should be dedicated to seeking people and taking them to Jesus and not involving themselves in cheeky affairs.

Kidero hailed praises for the outgoing Anglican leader saying he prayed saying he is a down to earth preacher.

“You are retiring but not tired. We will continue to seek your guidance and prayers even as you go home,” said Kidero.

Dr James Mwangi referred to Wabukala as a “bridge between the church and the community”.

“For the seven years that he (Dr. Wabukala) has been the Archbishop, he has has preceded the formation of the wings to fly committee,” Dr Mwangi said.

The Equity bank CEO also highlighted Wabukala’s effort in the fight against corruption.