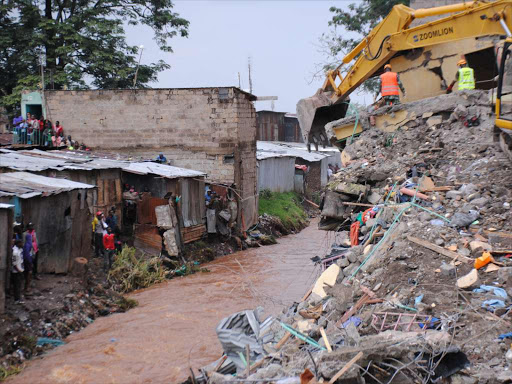 Kenya Defense Forces bulldozer continues to pull some of the rubles at a collapsed building in Huruma slum. photo/PATRICK VIDIJA

The death toll from the collapsed building in Huruma has risen to 51 after two more people died on Sunday while receiving treatment at Kenyatta National Hospital.

So far 13 bodies have been identified at the City Mortuary, nine days after the building collapsed.

Speaking to the Star on phone Masai said that though the rescue operation had come to an end, the site was still cordoned off.

" We suspect that some of the victims might have drowned in Nairobi river, while trying to escape "

The building collapsed on Friday, 29th April following heavy downpour in the capital.

Preliminary investigations indicated that the building was established on a weak foundation.

The building had 198 rooms.

Only five people were pulled out alive under the rubble last week.

Among the five, was a seven month old baby, who was the first to be rescued after being under the rubble for 72 hours.

and were released on a Sh1 million bond each.

The brothers are the suspected owners of the building.