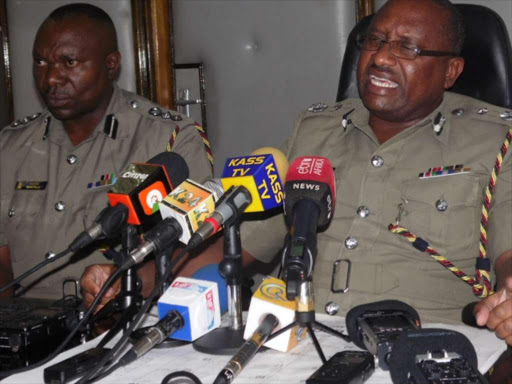 reveal the number of officers drawn from AP, regular police officers, GSU, Prisons and the NYS to be deployed in Nairobi streets to disperse the opposition leaders and their supporters.

“We have the strength and capacity to stop any protests and ensure law and order is maintained. If they attempt to demonstrate tomorrow, they shall regret it,” Koome said in an interview with the Star.

The opposition had announced that they will be resuming their weekly protests to force IEBC commissioners out of office.

Koome said the police will not allow acts of lawlessness anywhere.

“Everyone is entitled to their opinion but that should not lead to lawlessness,” Koome added.

The opposition chiefs want IEBC commissioners to vacate office and pave way for formation of a new commission.

On April 25, the group was teargassed and dispersed after attempting to forcefully gain entry into the IEBC’s offices and eject the officials in their first demonstration.

Supporters of the coalition were also teargassed in Kisumu the following day as they attempted to force their way into the central Nyanza IEBC offices.

Independent Policing Oversight Authority chairman Macharia Njeru urged police officers to observe the law and at the same time asked the opposition to submit to authority of courts.

"Willful disobedience of a court order is untenable in democratic society that professes belief in the rule of law," said Njeru.

They want to defy a high court injunction suspending such protests until determination of a petition filed against them by Jubilee MPs.

ODM chairman John Mbadi last week said that the High Court has no powers to stop Kenyans from exercising their rights.

Mbadi said the government has bought anti-riots equipment including water canons to suppress and oppress the opposition.

Post a comment
WATCH: The latest videos from the Star
by JOSEPH NDUNDA @MuthuiNdunda
News
08 May 2016 - 12:00
Read The E-Paper