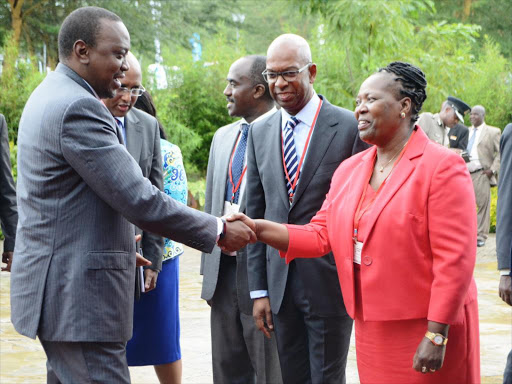 or increase the cost of employment,” he said.

He spoke at Enashipai Resort & Spa

during the opening ceremony of the Employers' Summit, at which 16 countries were represented.

Employment is the biggest challenge facing the continent, Uhuru said, and noted that youth, who account for 70 per cent of the population, are most affected.

He added that of that number of the youths, 50 per cent were either illiterate or unskilled, unemployed or under-employed.

Africa, and it can amount

to a fundamental and existential threat,” he said.

Uhuru noted that unemployment demands urgent attention from stakeholders with collective capital and clout to address it.

“Let’s create more goods locally and export them internationally so that we have the kind of dynamic manufacturing sector that employs millions of people,” he said.

countries have demonstrated an unparalleled resolve to mitigate the challenges that historically crippled them, from corruption to insecurity."

identified infrastructure as one of the continent's major challenges.

Chuma said majority of African governments committed less than 10 per cent of their GDP to the sector.

“Apart from the issue of poor roads and railway lines, the continent has a challenge of skilled workers thus hampering employment opportunities,” he added.

Federation of the Kenya Employers chairman,

noted that power and infrastructure were keys components for investors.

the issues of employment and investor confidence.