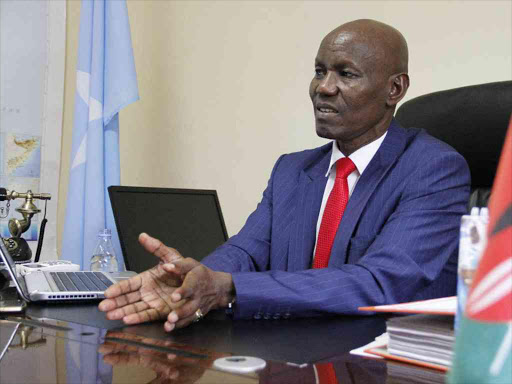 Ambassador Lucas Tumbo during the interview in his office in Mogadishu. /MONICAH MWANGI

The government of Kenya through its embassy in Somalia will open consulates in different parts of the country.

This, according to Kenya Ambassador to Somalia Lucas Tumbo, will help the government keep track of all Kenyans living there.

“On arrival here last year, we embarked on a registration exercise of all Kenyans and we now have a database. So far, we have registered 20,000 Kenyans, with 3,500 of them working in formal sectors,” said Tumbo during an interview in his office in Mogadishu.

He said liaison offices will be opened starting July, with areas like Kismayu, Hergesa, Baidoa and Garowe given priority.

“These offices will provide consular services to Kenyans living within those regions,” he said.

He also confirmed that they have managed to resolve cases where some Kenyans’ contracts had been breached by employers.

“We have had more than 20 such cases between Kenyans and employers here which we have already solved,” he said, encouraging others who have issues to contact the embassy. “Full consular services are currently being offered here,” he added.

Tumbo encouraged Kenyans to go work in Somalia since there are opportunities and the security situation has improved.

The Kenya Embassy in Somalia was operating from Nairobi until July last year, when it was relocated to Mogadishu. The embassy is currently hosted within a camp in the vicinity of Aden Abdulle Airport in Mogadishu town.

Tumbo confirmed that they are in the process of building an embassy which they expect to be complete by August. “It is already under construction across the airport runway,” he said.

The building which initially hosted the Kenyan Embassy was bombed by al Shabaab last year.